The Count of Monte Cristo: Classic Illustrated ( Complete and With the Original illustrations ) Vol.1 (Paperback) 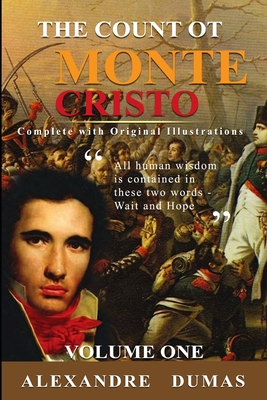 The Count of Monte Cristo
Classic Illustrated ( Complete and With the Original illustrations ) VOL. One

Written by French author Alexandre Dumas, The Count of Monte Cristo follows the life of Edmond Dantes as he embarks on a journey of revenge after being wrongly imprisoned and set up by none other than his so-called friends. Set during the years after the fall of Napoleon's empire, the story unwinds in several locations including Paris, Marseilles, Rome, Monte Cristo and Constantinople.

A handsome young sailor and soon to be ship captain Edmond Dantes seems to have it all in life, as he returns to Marseilles to wed the love of his life and fianc e, the beautiful Mercedes. However, Edmond's supposed friends have a hard time staying indifferent to his growing success, and their true jealous nature is revealed. Each has their own reason to envy Edmond. Danglers, who is a colleague of Edmonds, envies his career success, Fernand Mondego is in love with Edmonds fianc e, while his neighbor Caderousse is envious of his luck in life in general. Just as Edmond is about to pick the fruits that life has bore him, he is framed by the dangerously jealous trio, accused of being a traitor and unjustly sentenced to life in prison. As Edmond makes certain acquaintances in prison, he is determined to escape from his confinement and take the vengeance that is rightfully his. When Edmond does in turn return to the world of the free, he acquires a new identity and is motivated by his hunger for revenge. It is not said in vain that revenge is a dish best served cold.

An intriguing novel of justice, vengeance, mercy and redemption, The Count of Monte Cristo follows its protagonist as he goes through his numerous masks shifting into several aliases including the Count of Monte Cristo, Sinbad the Sailor, Lord Wilmore, and Abb Busoni. What makes the novel even more captivating is the fact that it is based on a true story. Captivating and keeping the reader at full throttle from beginning to end, it is no wonder the novel is a worldwide literary classic.

A special gift for those who like to read adventure novels.