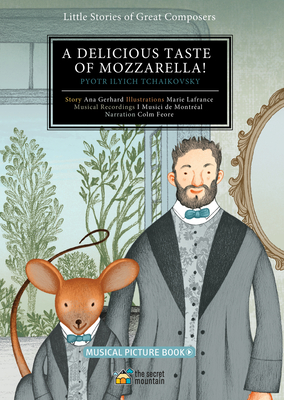 This summer, the great composer has offered them a gift that they didn’t expect, one that will last forever and bring happiness to children all over the world! Included are introductory notes on the composer along with recordings of the narrated story and the compositions “March of the Wooden Soldiers,” “Kamarinskaya,” “German Song,” and “The Witch” from “Album for the Young.” A unique code for the digital download of the recordings is also included.

Ana Gerhard studied as a concert pianist at the Mexican National Conservatory. She has taught piano for several years and has hosted numerous radio programs. Marie Lafrance is one of Québec's best-known illustrators and was a finalist of the Governor General's Literary Award. Colm Feore is one of Canada's premiere stage actors who has also frequently acted on television and in film. He is especially well-known for his supporting roles in notable Hollywood films The Sum of All Fears, The Chronicle of Riddick, and Pearl Harbor. I Musici de Montréal, a chamber orchestra founded in 1983, has released more than 40 recordings and performed in the past at New York City's Lincoln Centre, Tokyo's Kioi Hall, and Geneva's Victoria Hall.