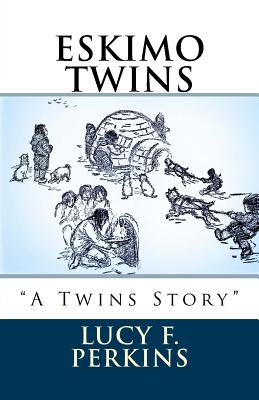 THIS is the true story of Menie and Monnie and their two little dogs, Nip and Tup. Menie and Monnie are twins, and they live far away in the North, near the very edge. They are five years old. Menie is the boy, and Monnie is the girl. But you cannot tell which is Menie and which is Monnie, -not even if you look ever so hard at their pictures That is because they dress alike. When they are a little way off even their own mother can't always tell. And if she can't, who can? Sometimes the twins almost get mixed up about it themselves. And then it is very hard to know which is Nip and which is Tup, because the little dogs are twins too. Nobody was surprised that the little dogs were twins, because dogs often are. But everybody in the whole village where Menie and Monnie live was simply astonished to see twin babies They had never known of any before in their whole lives. Old Akla, the Angakok, or Medicine Man of the village, shook his head when he heard about them. He said, "Such a thing never happened here before. Seals and human beings never have twins There's magic in this." The name of the twins' father was Kesshoo. If you say it fast it sounds just like a sneeze. Their mother's name was Koolee. Kesshoo and Koolee, and Menie and Monnie, and Nip and Tup, all live together in the cold Arctic winter in a little stone hut, called an "igloo." In the summer they live in a tent, which they call a "tupik." The winters are very long and cold, and what do you think They have one night there that is four whole months long For four long months, while we are having Thanksgiving, and Christmas, and even Lincoln's Birthday, the twins never once see the sun.

Lucy Fitch Perkins (1865 - 1937) Though all her ancestors were New Englanders from the date of the landing of the "Mayflower" on, She was born in the "backwoods" of Indiana. Her father, upon leaving college (Amherst), took up the profession of teaching and eventually became principal of a Chicago school. In the year 1865, however, he gave up his profession of teaching to engage in the lumber business in what was then a wooded area of Indiana, and there, soon after, She was born-and there my family lived until she was fourteen years old. At eighteen, immediately after graduation from high school, She went to the art school at the Museum of Fine Arts in Boston, and there studied for three years. For a year after her graduation, She illustrated for the Prang Educational Company of Boston, and then went to Brooklyn to teach in the newly established art school at Pratt Institute. Here She spent four happy winters teaching and studying with her students, and at the end of that period married Dwight Heald Perkins, a young Chicago architect whom she had met when they were both students in Boston. Since that time, their home has been in Chicago (Evanston) and here her daughter Eleanor Ellis and her son Lawrence Bradford were born. The life in Chicago was intensely interesting, from the first, and they lived fully in the events and thought currents of the time. During several years She did a good deal of illustrating which was the line of work for which she had prepared herself. It was not until later that she thought of writing for publication, though expression in words as well as in drawing was native to her. Then a friend who was also a publisher one day took me seriously to task. "You should write," he said, and urged this idea so persuasively upon me that the next day an idea for a book for children suddenly came to her mind. She made a dozen little sketches, presenting the idea, and it happened that this publisher came to dine with us the next evening, and she showed them to him. "There is your book," he said, "go ahead and write it, and she want it." So she wrote "The Dutch Twins". Though this was not literally her first book (She had previously published The Goose Girl, and A Book of Joys) still it was the real beginning of her writing. The former books had been written relative to the illustrations. Now the illustrations became secondary to the text.