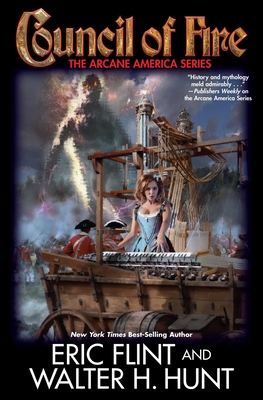 THE GREAT SUNDERING HAS ARRIVED

Halley’s Comet, 1759. The comet veers and strikes the Earth with nature-altering force. The New World splits from the Old. A chain of mountains rises in the Mid-Atlantic. No ship from the New World can find a passage to the Old. Those who try . . . simply disappear.

But the greatest change the comet has wrought is the dawn of real magic—and very real monsters. A kraken in the Atlantic, revenants in Jamaica, Dry Hands and Floating Heads in the Hudson valley, African ogres and worse set loose in the streets of New York.

Plus, the political situation has utterly shifted. The powerful Iroquois Confederacy disintegrates. Seneca and Cayuga follow a nefarious shaman and war leader, while the Mohawks ally with the English. What’s more, the English and the French in North America must contemplate what had been unthinkable: unification behind a young English prince, now the only person of royal blood left in the New World. In this transformed land of magic, royal blood brings unexpected powers. Yet if Prince Edward cannot master those powers, they may lead to his own destruction—and to a New World ruled by monsters.

About Council of Fire:
“Historical figures such as George Washington and Paul Revere are actively involved in the story, giving this alternate history a sense of what the colonies could have become with a bit of magic involved.”—Booklist

About Uncharted:
"History and mythology meld admirably, leading to a satisfying conclusion. This hardy adventure establishes a world ripe for many more rousing stories."—Publishers Weekly

"With a light and brisk narrative that propels its heroes through a number of increasingly dangerous situations, this combination of alternate history and fantasy should appeal to fans of Eric Flint, Harry Turtledove, and historical fantasy in general."—Booklist

“While delivering plenty of action that approximates the best of cinematic fantasy, Hoyt and Anderson also strive for—and achieve—a kind of gravitas that suitably reflects the majesty of an untrammeled continent. Their descriptions of raw nature and its emotional repercussions on the humans are subtly poetic without being overblown. The native tribes are depicted in authentic ways, especially the people of Sacagawea. . . . The characterization of all the cast members is deep and revelatory of human nature. . . . There is also humor amidst the seriousness . . . [Anderson and Hoyt’s] prose is a clear-eyed, sturdy naturalism meshed with flights of vivid unreality . . . filled with not only slambang adventures but also a kind of rational optimism that has become rare in genre works these days. . . Hoyt and Anderson, a kind of de Camp and Pratt for the twenty-first century, convey these ideals without lectures or sermons, embodying them in principled people doing exciting things.”—Locus

About Eric Flint:
“This alternate history series is . .  a landmark . . .”—Booklist

“. . . reads like a technothriller set in the age of the Medicis . . .”—Publishers Weekly

"A compelling and immersive novel in which every word feels authentic and every chapter draws the reader deeper into the dark and terrifying power of the mind.”—New York Journal of Books

Eric Flint is a modern master of alternate history fiction, with three million books in print. He’s the author/creator of the multiple New York Times best-selling Ring of Fire series, starting with first novel 1632. With David Drake he has written six popular novels in the “Belisarius” alternate Roman history series, and with David Weber he has collaborated on 1633 and 1634: The Baltic War, as well as four novels in Weber's Honorverse series. Flint was for many years a labor union activist. He lives near Chicago, Illinois.

Walter H. Hunt is the creator of the popular Dark Wing space adventure series. He has nearly twenty years experience in high tech as a software engineer and technical writer. His writing reflects an abiding interest in history, his area of college study, but science fiction has been his favorite reading material since he watched Neil Armstrong walk on the moon when he was but a lad. He is an active Freemason and a lifelong baseball fan. He lives in eastern Massachusetts with his wife and daughter.