The Hunt for Truth (Hardcover) 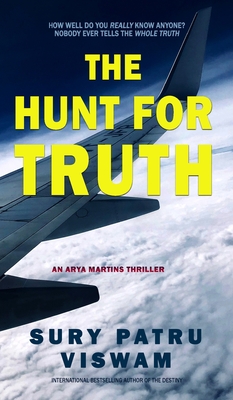 How well do you really know anyone? Nobody ever tells the Whole Truth.

Bosch meets Homeland in this heart-pumping thriller from the international bestselling author Sury Patru Viswam, where a missing person investigation exposes dark secrets, lies, and a conspiracy that threatens our nation's safety.

On the early hours of the morning of September 11, 2001, a hit and run accident leaves a man unconscious on an off-road in the outskirts of Philadelphia.

Twenty-four hours later, a woman named Sania Tariq walks into a police station in Philadelphia to report her husband is missing.

For maverick Philadelphia detective Arya Martins, this case is personal... because she knew Sania Tariq and they used to be close friends before Sania disappeared ten years ago.

As the investigation unfolds, Detective Martins becomes convinced that Sania's husband is not who he claims to be. With the help of her dynamic partner Edgar James, Arya Martins hunts for truth by following a trail of lies and secrets and uncovers a conspiracy of terror festering in the city of Philadelphia that would destroy our way of life. With the clock ticking fast, Arya Martins races against time to destroy a conspiracy before it's too late.

Tense, taut, expertly crafted, and brimming with unexpected twists, The Hunt for Truth is a riveting thriller that will leave the readers breathless long after they turn the final page.