Dancing with Angels in Heaven: Tidings of Hope from the Spirit Realm (Paperback) 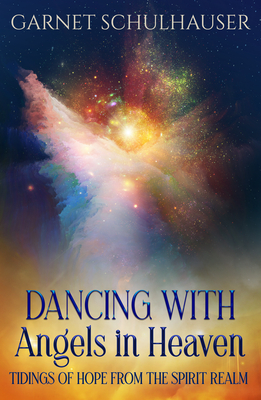 Dancing with Angels in Heaven is the fifth book in the pentalogy of the author’s encounters with his spirit guide that began when he was confronted on the street by a homeless man named Albert, who turned out to be a wise spirit in disguise.

The author’s first four books, Dancing on a Stamp, Dancing Forever with Spirit, Dance of Heavenly Bliss, and Dance of Eternal Rapture, recount his dialogue and astral trips with his guide, who took him to the Spirit Realm and other planets in our galaxy.

In his fifth book, the author recalls a trip to the Spirit Side to observe an orientation class about planet Earth for souls planning to incarnate on our planet. In this session, souls learn about the origin of the universe, the true nature of souls, the preparation of Life Plans for each new incarnation, the purpose of a human journey on Earth, the role of spirit guides and guardian angels in our lives, the joyful transition of souls back to the Spirit Side in the afterlife, and the illuminating aspects of the Life Review we will all enjoy after leaving our bodies behind.

The book confirms that God (Source) does not make rules for us to follow and does not judge or punish souls for what they did on Earth, which means that all souls return to the Spirit Side regardless of what they did during their lives.

In the Spirit Realm, he was thrilled to meet several famous historical figures, including Albert Einstein, Marie Antoinette, and Mother Teresa, who recalled the wisdom they had gained from their lives on Earth.
The author describes an astral excursion to a distant planet inhabited with intelligent reptiles who are able to convert energy from their sun into sustenance for their bodies. He also describes a trip to Earth in a parallel universe where humans learned to drastically reduce pollution by developing a technique to teleport people and goods from place to place without burning fossil fuel.

On the Earth plane, the author travelled to the underground caverns in Area 51 where he saw the spacecraft that crashed near Roswell, New Mexico in 1947, along with the bodies of the little aliens who perished in the mishap. Albert confirmed to the author that these aliens are one of several advanced and benevolent ET races who have been visiting our planet for eons.

And his most fascinating experience was listening to a conversation with three wise Masters, Jesus, Mohammad, and Moses, who discussed returning to Earth someday as a much-needed messiah to lead humans onto the path of spiritual enlightenment.

Garnet Schulhauser is a lawyer who practiced corporate law for over thirty years with two blue-chip law firms in Calgary until he retired in 2008. Since then, he has published five books in the spiritual/metaphysical genre which recount his dialogue and astral travels with his spirit guide, Albert.
Since the release of his first book, Garnet has been active with book signings and conference presentations and has been interviewed on over one hundred sixty radio talk shows broadcast from studios around the world. In addition, Garnet is a Level 2 Quantum Healing Hypnosis Technique (QHHT) Practitioner, a modality that guides clients to experience past lives and connect with their Higher Selves.

“Garnet Schulhauser’s Dancing with Angels in Heaven is another great work of his. The book is challenging to put down. The author’s journey with Albert, his spirit guide, to Aglaia answers many of the eternal questions that we all have. Topics such as developing a soul’s life plan prior to incarnating, why incarnate, meeting with the Council of Wise Ones to prepare for life on earth, what souls chose to experience in the afterlife, parallel universes, the pandemic and more. This book is absolutely fascinating and brilliantly written. Get ready to transverse the universe with Albert and Garnet Schulhauser, it’s an astounding experience.”
— Valerie Camozzi, RN, and Quantum Healing Hypnosis Technique Practitioner

"Garnet Schulhauser's fifth book, Dancing with Angels in Heaven, is a delightful read which will not only have you chuckling at the ongoing comic stick between Garnet and his Angel Guide Albert, but will leave you feeling comforted.
On this adventure with Albert, Garnet learns the intricacies of the soul's journey from creation to incarnation and back to "heaven". Many of those hard questions we all ponder are discussed. I was left with a feeling of peace, that we are here on purpose and that we return to bliss when our time on earth is done."
— Rhonda Elliott, Reiki Master/Teacher and co-host of Spirit Sessions, a View of the light

"Dancing with Angels in Heaven is the crown jewel of one my favorite spiritual book series of all time and I highly recommend it. Garnet and Albert are back to lead us on more fascinating adventures to the spirit side so we might peak behind the curtains once more. As to be expected, we are introduced to a variety of characters, some old and some new, that have a brilliant and sometimes comical way of relaying fascinating spiritual insights. Most importantly, this book has a very serious and time sensitive message with instructions for the next steps humanity must take for our growth and evolution."
— Jonny Enoch, Host of Mystery Teachings on Gaia

"Congratulations, Garnet, for writing yet another book chock-full of mind-boggling information that caused a feeling of peace, harmony and hope to well up within me. This book brings it all together completely and expertly.
Thank you, Garnet, for writing your five books providing the reader step-by-step insights along the way and important, thought-provoking information.
I suggest that you purchase all of Garnet’s books and see for yourself what reading and studying does for you. I have had the privilege of interviewing Garnet Schulhauser as a guest on my monthly radio talk show several times, and he was very well received by my listening audience."
— Dr. Anne Marie Evers, Author & Counsellor

“Prepare to be entertained, humoured, moved, and challenged to evolve! It is rare to find a fellow lawyer, an adept of the material world, so eloquently relaying the often bizarre, profound, and thought-provoking experiences from the spiritual realm made possible through the astral body.
This is a book of hope for Mankind, faith in the Divine and describes a logic of the Soul. The latest messages are neatly bound together with signature threads of direct reporting, careful clarity and cool pragmatism in the face of significant and often unusual encounters that expose the boundaries of what we think is possible contrasted to "what is" or "may be" the case.
Ultimately, the following pages gently comfort and invite you, the reader, to self-question, interpretate and work on your life all the while making a better world and embracing the journey of infinite consciousness towards the Light. Bon voyage!”
— J.P. Hague, lawyer, researcher & writer

“Many years ago, Garnet Schulhauser left his lucrative law practice after someone incredibly wise and immensely kind challenged him to consider a far richer way to live. In the process, one that asked much of the author but returned vastly more, Garnet dug deep into his soul to discover “the ineffable joy of spiritual enlightenment.” He has not stopped writing and talking about it since. So, it is with bringers of glad tidings: they invite us to join in the cosmic dance and work it until we realize that the music never ends.”
— Gary Mantz and Suzanne Mitchell, hosts of The Mantz and Mitchell Show on 1150 KKNW Seattle