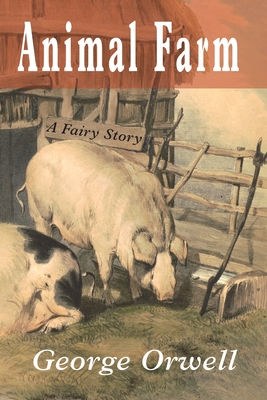 By George Orwell, Eric Blair
$6.60
Email or call for price.

2021 Facsimile of the 1945 Edition. This is now considered a classic Satire on dictatorship and one of Orwell's most enduring short novels. Fueled by Orwell's intense disillusionment with Soviet Communism, Animal Farm is a nearly perfect piece of writing, both an engaging story and an allegory that actually works. When the downtrodden beasts of Manor Farm oust their drunken human master and take over management of the land, all are awash in collectivist zeal. The future, however, is far from certain as the drama plays out in actual events. A cautionary tale.

"As lucid as glass and quite as sharp... Animal Farm] has the double meaning, the sharp edge, and the lucidity of Swift."-Atlantic Monthly

"A wise, compassionate, and illuminating fable for our times."-The New York Times

"Orwell has worked out his theme with a simplicity, a wit, and a dryness that are close to La Fontaine and Gay, and has written in a prose so plain and spare, so admirably proportioned to his purpose, that Animal Farm even seems very creditable if we compare it with Voltaire and Swift."-Edmund Wilson, The New Yorker

"The book for everyone and Everyman, its brightness undimmed."-Ruth Rendell