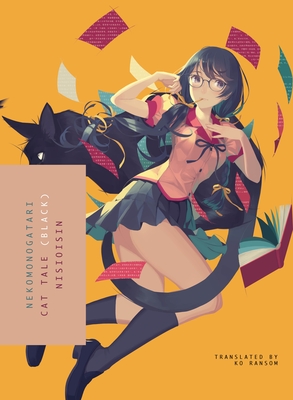 By NISIOISIN, Vofan (Illustrator)
$15.95
In Our Warehouse - Expected arrival in 2-5 days

Following up on the high note of family ties on which the previous installment concluded, but preceding it chronologically, we find Araragi and his little sister Tsukihi, the heroine of the last volume, in full sibling rivalry mode as they bicker about love. The conversation that cannot end unfolds in its unabashed original glory herein.

Like KIZUMONOGATARI, which delved into our narrator’s disastrous spring break, Cat Tale (Black) is a prequel about another catastrophe, mentioned often yet never recounted even in a foregoing chapter dedicated to Miss H.: namely, the model student’s rampage over Golden Week, a string of holidays starting at the end of April.

Closing out what has come to be known as the “First Season” of the series, this episode of ’GATARI, as rich as ever in silly banter and poignant profundities, richer than usual in snide meta comments about the anime, will make you laugh and cry, or just put a grownup smile on your face, maybe, but is guaranteed to stay with you forever.

Palindromic NISIOISIN made his debut as a novelist when he was twenty. A famously prolific author, he is known to publish more than a book per month at times. With his inexorable rise, he has become the leading light of a younger generation of writers who began their careers in the twenty-first century.

Titles by him published in translation so far include Decapitation: The Blue Savant and the Nonsense User (formerly known as Zaregoto) and a manga adaptation of his novel Imperfect Girl (from our Vertical Comics imprint). The MONOGATARI series, widely considered his masterpiece to date, is becoming available in English for the first time.