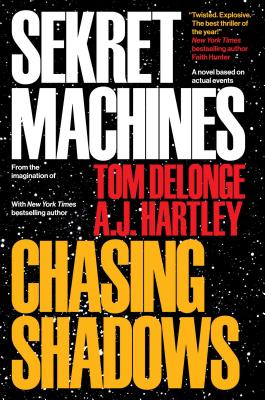 By Tom DeLonge, A.J. Hartley
Email or call for price.
Not Available at This Time

This is book number 1 in the Sekret Machines series.

Praised as "an exhilarating thrill ride" that may never have you looking at the night sky the same way again, Chasing Shadows is the first book in the multimedia Sekret Machines franchise that will reveal fascinating secrets surrounding the true, well-documented events of Unidentified Aerial Phenomenon.  Written by award-winning creator Tom DeLonge and NYTimes bestselling academic AJ Hartley in a powerful collaboration with top government advisors that keep the truth on course in this historical thriller.

For those who know…

that something is going on…

The witnesses are legion, scattered across the world and dotted through history, people who looked up and saw something impossible lighting up the night sky. What those objects were, where they came from, and who—or what—might be inside them is the subject of fierce debate and equally fierce mockery, so that most who glimpsed them came to wish they hadn’t.

Most, but not everyone.

Among those who know what they’ve seen, and—like the toll of a bell that can’t be unrung—are forever changed by it, are a pilot, an heiress, a journalist, and a prisoner of war.  From the waning days of the 20th century’s final great war to the fraught fields of Afghanistan to the otherworldly secrets hidden amid Nevada’s dusty neverlands—the truth that is out there will propel each of them into a labyrinth of otherworldly technology and the competing aims of those who might seek to prevent—or harness—these beings of unfathomable power.  Because, as it turns out, we are not the only ones who can invent and build…and destroy.

Featuring actual events and other truths drawn from sources within the military and intelligence community, Tom DeLonge and A.J. Hartley offer a tale at once terrifying, fantastical, and perhaps all too real. Though it is, of course, a work of…  fiction?

Tom DeLonge is an award-winning producer, author, platinum recording artist, researcher and entrepreneur from San Diego, CA. Today Tom, with his company To The Stars, produces original content that aims to inspire a newfound appreciation of the profound, yet unresolved, mysteries involving science and the universe through entertainment directly informed by science. His first multi-media franchise Love, told the story of an isolated astronaut on the International Space Station and included a double album by his band Angels And Airwaves with the feature film premiering in 600 theatres across the United States. His next franchise Poet Anderson was inspired by a dream study conducted at Stanford University and spanned an award-winning short film, a chart-topping album, acclaimed comic book series, graphic novel and a YA science fiction novel co-written with NYTimes Bestselling author Suzanne Young. Most recently he is working on Sekret Machines which spans both sci-fi fiction and nonfiction thesis informed by unprecedented access at the highest level of the government and science to uncover information about the UFO phenomenon with renowned authors AJ Hartley and Peter Levenda. His Sekret Machines work has won him the 2017 UFO Researcher of the Year award.

A.J. Hartley is the New York Times and USA Today bestselling author of books in a variety of genres and was born and raised in Lancashire in Northern England,. AJ’s stories are driven by mystery and danger but also reflect his abiding interest in archaeology, history, and foreign travel. As an English major at Manchester University he took extra classes in Egyptology and got a job working on a Bronze Age site just outside Jerusalem. Since then, life has taken him to many places around the world, and though he always leaned more towards the literary than to the strictly historical, his fascination with the past continues unabated. He has an M.A. and Ph.D. in English literature from Boston University, and he is the Russell Robinson Professor of Shakespeare Studies at the University of North Carolina, Charlotte, and works as a scholar, screenwriter, dramaturg and theatre director.

“What you hold in your hands is a piece of a very large puzzle. It represents the first installment in one of the most ambitious projects ever undertaken in this or any other field. It is a project that involves science and history, politics and religion; fiction and non-fiction. All of these elements are woven together in an effort to express a singular truth. While they each can be appreciated in a stand-alone way—and who, after reading this thrilling novel, could disagree?—taken together they reveal an aspect of reality that is so astonishing that it only can be understood intuitively as well as rationally.” -Peter Levenda, Author of Sekret Machines non-fiction series

"An exhilarating thrill ride from the first page with a compelling cast of characters, a tantalizing mystery, and a gripping adventure. I may not look at the night sky the same way again!" -David Morrell, New York Times bestselling author of The Shimmer

“Sekret Machines scratches at the surface of “who do” we trust with our classified technology - certainly our adversaries are aware of our undertakings, as they are doing the same, but what of our citizens, our politicians, even our own military. Tom DeLonge and A.J. Hartley create a convincing narrative describing the “cat and mouse” game that is timeless between strategic adversaries. It has existed under the sea, on the surface of the earth and in its skies, why wouldn’t we believe it occurs in space. Our military leaders have been saying space is a contested environment for years now, perhaps we should believe them!” -Maj. Gen. Michael J. Carey - Special Assistant to the Commander, Air Force Space Command

"The prose is a joy; effortlessly pulling off the feat of making the unbelievable appear not only plausible but utterly, terrifyingly, realistic. ... Billed as the first of a trilogy, Sekret Machines redefines ‘provocative’; we defy you not to lie awake questioning everything that you ever thought you knew after you’ve turned the last page." -STARBURST Magazine

“The generation-spanning, international scope of the story is impressive” and “a four-pronged thriller that hooks you in at different times” -UPSET Magazine

“It has intrigue, high-technology, betrayal, lights in the sky, religion, covert affairs, politics, history, and it takes everything you thought you knew about the world around you and flips it right over.” -Modern Little Victories