Convict Conditioning: How to Bust Free of All Weakness--Using the Lost Secrets of Supreme Survival Strength (Paperback) 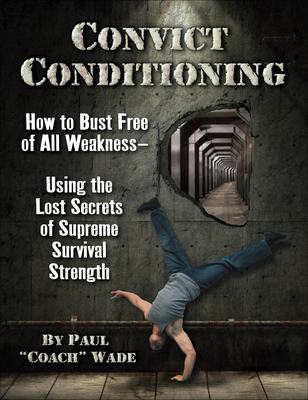 Chances are that whatever athletic level you have achieved, there are some serious gaps in your OVERALL strength program. Gaps that stop you short of being able to claim status as a TRUE man.

The good news is that—in Convict Conditioning—Paul Wade has laid out a brilliant 6-set system of 10 progressions which allows you to master these elite levels. And you could be starting at almost any age and in almost in any condition!

Paul Wade has given you the keys—ALL the keys you’ll ever need— that will open door after door after door for you in quest for REAL physical accomplishment. Yes, it will be the hardest work you’ll ever have to do. And yes, 97% of those who pick up Convict Conditioning, frankly, won’t have the guts and the fortitude to make it. But if you make it even half-way through Paul’s Progressions, you’ll be stronger than almost anyone you encounter.

If you’re a 3-percenter, in particular, then this book is for you. Have at it!

Paul Wade is the bestselling author of Convict Conditioning which has sold over 750,000 copies worldwide and is regarded as one of the premier experts in bodyweight exercise and calisthenics. Wade has authored four major titles on calistehnics and five videos shot originally on Alcatraz. Wade spent over twenty years in maximum security prisons, where he originally developed his acclaimed Convict Conditioning programs.