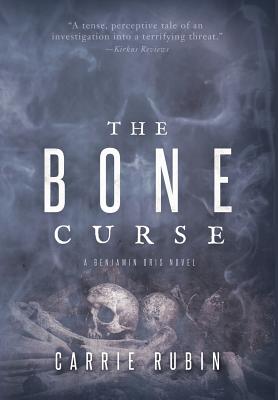 This is book number 1 in the Benjamin Oris series.

Medicine has no cure for evil...

Ben Oris, a pragmatic med student from Philadelphia, gets cut by an old bone while touring the Paris catacombs. His companion Laurette, a public health student from Haiti, senses danger and worries an evil curse now runs through him.

Ben scoffs at the idea--he simply has a wound that won't heal--and back home he returns to his stressful clerkship at the hospital. But when people close to him succumb to a grisly illness and a dark priest pursues him, his skepticism wavers. Could a bone from an 18th century skeleton with a frightening history really cause modern-day disease?

With the help of Laurette, he scrambles to find a cure through Vodou before more of his loved ones die. But first, he must battle the mysterious priest who's bent on vengeance and determined to have Ben's blood as his own.

"A tense, perceptive tale of an investigation into a terrifying threat."-Kirkus Reviews

"The Bone Curse is a strong medical thriller--inclusive, skillfully written, and inviting."-Foreword Reviews

"A teeth-grinding story of ancient curses and mystical remedies ... The Bone Curse will keep even the most skeptical reader awake long past midnight."--Andra Watkins, New York Times bestselling author of Not Without My Father and author of the Nowhere Series

"From the first page to the last, the tensions never let up ... Bravo to Rubin for creating another fast-paced medical thriller that both keeps you turning pages and opens a window into a world most of us have never considered."--Audrey Kalman, author of What Remains Unsaid and Dance of Souls

"A sizzling slice of Vodou served alongside methodical medical science. What's not to love? Unique characters, a plot that galloped along, and some damn fine writing, too."--G. M. Barlean, author of The Rosewood Series

"A cursed medical student... a vengeful Vodou priest... a vast subterranean Parisian catacomb with more secrets than the bones that rest there... what could go wrong? Take note medical thriller fans, the genre has a new contender, and her name is Carrie Rubin."--Larry Brooks, USA Today bestselling author