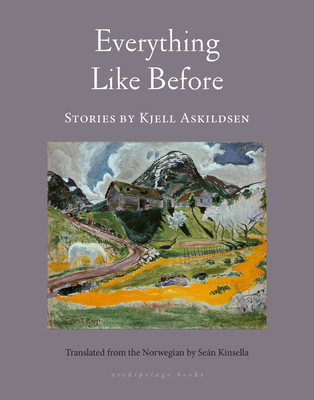 By Kjell Askildsen, Sean Kinsella (Translated by)
$21.00
Email or call for price.

From one of the greatest Norwegian authors of the twentieth century, comes a collection of spare, biting stories of people caught between reality and expectation, hope and despair, love and longing.

A man and a woman in a quiet, remote house, an old man on a park bench, an estranged brother in a railway café -- Kjell Askildsen's characters are surrounded by absence. Filled with disquiet, and longing, they walk to a fjord, they smoke, they drink on a veranda, they listen to conversations that drift through open windows. Small flashes like the promise of a sunhat, a nail in a cherry tree, or a raised flag, reveal the interminable space between desire and reality in which Askildsen's characters are forever suspended. Widely recognized as one of the greatest modern short-story writers, with unadorned prose and a dark humor, Askildsen captures life as it really is, the worlds of his characters uncanny mirrors of our own.

Kjell Askildsen (b.1929) is widely recognized as one of the preeminent Norwegian writers of the twentieth century and among the greatest short-story authors of all time. Askildsen's minimalist stories have garnered him numerous literary awards, among them are: The Norwegian Critics' Prize (1983 and 1991), the Brage Honorary Prize (1996), the Swedish Academy's Nordic Prize (2009), and in 1991, he was nominated for the Nordic Council's Prize for Literature.

Seán Kinsella is from Dublin, and holds an MPhil in literary translation from Trinity College Dublin. He has translated into English works by Kjell Askildsen, Karl Ove Knausgaard, and Frode Grytten, among others. His translation of Stig Saeterbakken's Through the Night, was long-listed for the Best Translated Book Award in 2014. He lives in Norway.

"Stark, minimalist stories, translated from the Norwegian, about characters hungry for more than life has delivered."
--New York Times

"Redolent of Chekhov and Isaac Babel . . . There is an old-world pathos to these stories; their public face is stoic, but one often sees them in private hours where they pull the rug out on their personality to give the reader the chance to clasp their essences tighter . . . [Everything Like Before] made me remember fiction-making is about communication, something someone as avant-garde as Donald Barthelme would proselytize for."
--Greg Gerke, The Los Angeles Review of Books

"These three dozen stories and vignettes by the venerable Norwegian writer range from bleak to darkly comic . . . [Everything Like Before] features mainly spare prose exploring the distances and conflicts between people linked by blood, marriage, or circumstance . . . [Kjell Askildsen] is a fine craftsman who offers lighter moments amid the Nordic gloom and an unrelenting intelligence."
--Kirkus Reviews (Starred Review)

"Deftly translated by Séan Kinsella, this selection of odd, austere yet transfixing stories from various points of Askildsen's long career showcases his stylistic verve and his relentless scrutiny of human frailties and absurdities . . . It is hard not to be entranced by his stripped-back prose, or the original way in which he depicts the agony of empty lives and the trials of everyday existence. "
--Malcom Forbes, Minneapolis Star Tribune

"Kitchens, decks, doorways, sidewalks, restaurants, and bars are charged with significance as spaces where characters negotiate relationships and appraise their lives. Mundane objects that carry emotional weight—raincoats, hair ribbons, cups of coffee—bring the stories alive . . . In the short stories of Everything Like Before, loneliness, despair, and longing are described with devastating nuance."
--Rebecca Hussey, Foreword Reviews

"[Kjell Askildsen] is a consummate chronicler of contradictory, quicksilver emotions and impulses. There is in his work a careful calibration of his characters' inner lives, of small dramas in no way empty of incident, whose ultimate crux is the desultory, dangerous weight of tim.
--Ben Goldman, Words Without Borders

“Kafkaesque… with wry humor and sardonic wit, Askildsen is a clear master of the genre.”
--Travel Through Stories

"Ultimately, Askildsen's stories are about the horror of the mundane, the emptiness of everyday life, and the paradox of both wanting and fearing change (...) these tales are unconcerned with plot, but rather focus on the subtleties and impossibilities of human interaction. They provide us with windows through which we, like the characters, may watch each other, may be held up for scrunity."
--The Literateur

"Kjell Askildsen's dry, absurd humor is not unlike that of Beckett...His short stories are packed with irony, and the dialogue is sharp and expressive"
--Times Literary Supplement

"The lengthier works shine brightest, among them “A Sudden Liberating Thought,” in which a Beckett-like series of encounters between two old men becomes a discourse on euthanasia; and “Mardon’s Night,” where three people’s thoughts and actions blur in enigmatic blocks of text.... this definitive volume brims with stellar material."
--Publishers Weekly

"a meditation on individual freedom, a book fraught with the day-to-day pressures of human life. The nine brief stories collected within can be described in terms of absences. The absence, for example, of experimental or ornate, "flowery," prose. The absence of unnecessary characters. The absence of exotic or alien locales, or of complicated plot arcs ... One senses that Askildsen is delicately, deliberately seeking answers to a particular set of nagging questions, and is never quite satisfied with what he uncovers"
--Adam Segal, Numero Cinq Magazine

"Kjell Askildsen writes what might reasonably be called ghost stories in which there are no ghosts. His prose, uniformly muted and bare, seems haunted by absence...His landscapes are stage sets in which houses and lawns exist alone in an empty world..."
--Aaron Their, The Nation

"...full of compelling strangeness. Lives surge through a few brittle pages, suppressed loves and resentments threaten to erupt. Characters are rarely isolated but their loneliness is palpable as they steal time in the shadows. Names recur throughout the book so the reader tries to connect people with events, but it's the loose ends which draw you back to these taut dramas."
--Max Liu, The Independent

"I am just over the moon about Everything Like Before. An honest-to-goodness fount of suggestion and restraint, cascading omens and omissions throughout. Perennial storytelling."
--Justin Walls, bookseller at Bookshop.org

"These stories are about the subtleties of human exchange, micro commutes between one activity and another . . . The characters, their circumstances, the awkward, familiar touches of humor remind me a bit of Miranda July's stories, but just of a different generation."
--Stephanie Malak, Sound Bite Book Review

"Despite the dark subject matter, the stories [in Everything Like Before] make for bracing reading due to Askildsen’s spare prose and the sly humor that arrives unexpectedly in the middle of a character’s downfall . . . Rueful quips abound throughout this collection and lend a refreshing lightness to Askildsen’s bleak vision of the absurd."
--Phillip Garland, World Literature Today

"[Askildsen's] themes tend to be sombre, with a dark, dry wit most reminiscent of Beckett . . . These stories—whether long or short—open up haunting, unsettled spaces inhabited by characters who fail to connect, or do so only by awkward chance."
--Joseph Schreiber, Rough Ghosts

"Askildsen’s particular gift is the subtle way he imbues mundane moments with so much frustration and rage, which creates an atmosphere of electric disquiet. The conflicts in each story always threaten to boil over. The silences are violent . . . The stories in Everything Like Before are a blend of the comic and the tragic, told in prose made taut with unrelenting tension."
--Kent Kosack, Full Stop