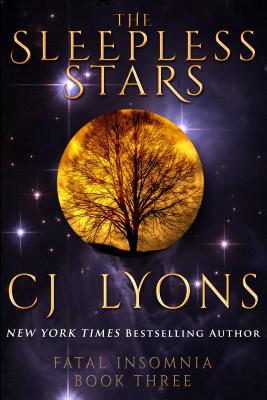 This is book number 3 in the Fatal Insomnia Medical Thrillers series.

"A heroine you'll never forget and a story that whips by at bullet speed." Tess Gerritsen, NYT bestselling author

For fans of Michael Crichton and James Rollins, a medical thriller series that explores what can go wrong when cutting edge technology and an ancient plague are in the hands of the wrong people: Fatal Insomnia, Book #3

When you have no time left, you realize what you're really living for...

For Dr. Angela Rossi the past holds only pain and the future promises only an early death as Fatal Insomnia consumes her.

But Angie will never stop fighting. Especially now that she's learned that her disease-and the disease she's discovered in dozens of young children-isn't a quirk of heredity but rather the creation of an unknown cabal.

While Angie explores the betrayals and lies that led to the Fatal Insomnia epidemic, Devon Price, whose daughter is also infected, uses his street skills to hunt those responsible. He'll do anything to save his daughter. Lie, cheat, steal, kill...it doesn't matter. Not as long as Esme is saved.

In the end, their only hope might be a desperate deal with the devil: the cabal behind the man-made Fatal Insomnia epidemic. A deal paid with blood. A deal not everyone will survive.

"CJ Lyons scores a major triumph...a remarkable medical thriller equal to the very best of Robin Cook or Michael Crichton. This intelligent, well-crafted novel, based on a startlingly original premise, builds up tension to the breaking point and beyond, delivering plenty of surprises along the way. Totally absorbing and impossible to put down." Douglas Preston, New York Times bestselling author

THE SLEEPLESS STARS is the third in the ongoing Fatal Insomnia series. The books are meant to be read in order beginning with FAREWELL TO DREAMS and A RAGING DAWN.

New York Times and USA Today bestselling author of twenty-seven novels, former pediatric ER doctor CJ Lyons has lived the life she writes about in her cutting edge Thrillers with Heart. CJ has been called a "master within the genre" (Pittsburgh Magazine) and her work has been praised as "breathtakingly fast-paced" and "riveting" (Publishers Weekly) with "characters with beating hearts and three dimensions" (Newsday). Her novels have won the International Thriller Writers' prestigious Thriller Award, the RT Reviewers' Choice Award, the Readers' Choice Award, the RT Seal of Excellence, and the Daphne du Maurier Award for Excellence in Mystery and Suspense. Learn more about CJ's Thrillers with Heart at www.CJLyons.net.