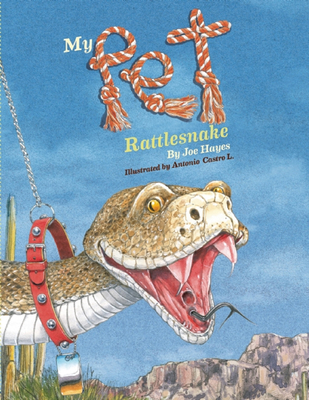 Joe Hayes is back with another unbelievable, astounding, and totally true tall tale, straight from his own childhood in the Arizona desert.

One day little Joe is out in the desert, walking around, and he sees a rattlesnake in trouble. Joe saves the snake's life That's when things get weird. The rattler follows Joe home. My gosh It's only a rattlesnake, nothing new for a desert boy like Joe, so he keeps him for a pet. His dad is annoyed, the neighbors are terrified, but soon the friendly snake slithers his way into their hearts. The snake cuddles at the foot of Joe's bed, plays in the yard, he even scares away a burglar and alarms the police. What a charmer Is there really such a thing as cold-blooded love?

Joe Hayes, a children's book writer and one of America's premier storytellers, loves telling tall tales from growing up in Arizona. Whether it's writing stories or telling stories from the tri-cultural American Southwest, Joe is always at home celebrating the imagination of childhood. The New Mexico Library Association named Joe the Centennial Storyteller in 2010, a storyteller so good he only comes around once every one hundred years

Antonio Castro L. was born in Zacatecas, Mexico, and has lived in the Juarez-El Paso area for most of his life. The illustrator of dozens of children's books, this is his fourth collaboration with Joe. He and his son book designer Antonio H. work on his books as a team.

Joe Hayes is the author of over twenty books for children and young adults. His writing style is storytelling-tested and has its roots in the oral traditions of the American Southwest. Each summer, he delights children and adults alike with his summertime storytelling performances at Santa Fe's Wheelwright Museum. The rest of the year finds him speaking to thousands of readers around the United States at schools, libraries, and conferences. His book Ghost Fever/Mal de Fantasma won the Texas Bluebonnet Award in 2007. Dance, Nana, Dance / Baila, Nana, Baila, his collection of folktales from Cuba, won the Aesop Prize in 2009. The New Mexico Library Association named Joe the Centennial Storyteller in 2010, a storyteller so good he only comes around once every 100 years! Antonio Castro Lopez (L.) was born in Zacatecas, Mexico and has lived in the Juarez-El Paso area for most of his life. He has illustrated dozens of childrens' books including Barry, the Bravest Saint Bernard (Random House), Pajaro Verde, The Treasure on Gold Street, The Day It Snowed Tortillas and The Gum-Chewing Rattler (Cinco Puntos Press). In 2005, the government of the State of Chihuahua, Mexico, commissioned Antonio to paint a mural for the government palace. The mural commemorates the anniversary of the Battle of Tomochic. His work has been exhibited in galleries and museums in Texas, Mexico City, Spain and Italy.