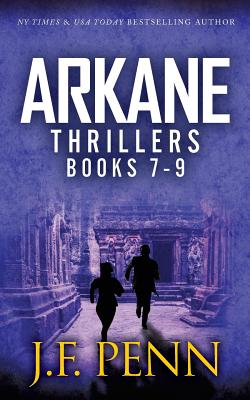 New York is built upon a dark secret. If this knowledge falls into the wrong hands, the city will crumble.

When a woman is crucified on a burning cross in downtown Manhattan, it marks the beginning of a dangerous crusade. The Confessors seek the powerful relic of a dark angel and they will stop at nothing to get it.

ARKANE agent Jake Timber is in New York to investigate the eleventh-century Cloisters Cross alongside Naomi Locasto, a linguist, when they become entangled in the mystery.

As his past threatens to overwhelm him, can Jake find the relic of the angel before the Confessors destroy the city?

An ancient weapon threatens the heart of India.

A bomb explodes in the center of London and a fragment of an ancient Hindu sculpture is stolen from the ARKANE Headquarters by a secret organization bent on mass murder. If the sculpture is put together again, it will reveal the key to the Brahmastra, a weapon with the power of a nuclear explosion.

As those they love are threatened, ARKANE agents Morgan Sierra and Jake Timber must search for the pieces of the relic before it can be activated at the Kumbh Mela, the greatest pilgrimage on earth.

In a fast-paced adventure from the slums of Mumbai to the temples of Kolkata, the Taj Mahal in Agra to the killing fields of Rwanda, Morgan and Jake must find the pieces of the sculpture before it's too late.

"When the thousand years are ended, Satan will be released from his prison." Revelation 20:7

The thousand years are ended.

A marble tablet found in the ruins of Babylon warns of the resurrection of a banished serpent in the final days. A sarcophagus is discovered in the deepest ocean, locked by seven seals scattered throughout the ancient world.

As the Brotherhood of the Serpent race to find the seals before a rare lunar eclipse over the heart of Jerusalem, ARKANE agents Morgan Sierra and Jake Timber battle to find them first. But this time, evil threatens to destroy all that Morgan loves and she must wrestle an apocalyptic foe as well as fighting to conquer her own fears.

In a fast-paced adventure from the ruins of Iraq to the snake-handling churches of the Appalachian Mountains, from archaeological digs in Israel to the tombs of Egypt, Morgan and Jake must find the seven seals and stop the resurrection of an evil as old as mankind. An evil that will usher in the End of Days.