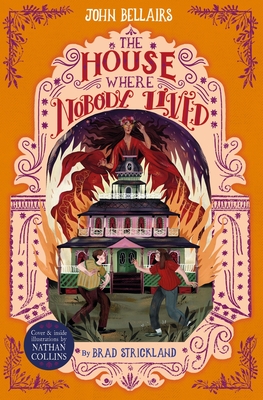 This is book number 11 in the The House with a Clock in Its Walls series.

As Lewis and Rose Rita investigate all the supernatural happenings in New Zebedee, they get more than they bargained for when a new family moves into the Hawaii House. Lewis and Rose Rita are soon drawn into a mystery involving forces far beyond the shores of their imagination.

Why are there strange drumbeats emanating from the top floor of the Hawaii House? And why is Lewis having dreams about Pele, the Hawaiian goddess of fire?

For fans of Goosebumps.

John Bellairs (1938-1991) was an award-winning American author of many gothic mystery novels for children and young adults, including The House with a Clock in Its Walls, which received both the New York Times Outstanding Book of the Year Award and the American Library Association Children's Books of International Interest Award; The Lamp from the Warlock's Tomb, which won the Edgar Award; and The Specter from the Magician's Museum, which won the New York Public Library 'Best Books for the Teen Age' Award. Brad Strickland has written more than eighty-five published books, including entries in the Lewis Barnavelt and Johnny Dixon series, following the death of the original series creator, John Bellairs. He is a Professor Emeritus of English and lives in Georgia with his wife, Barbara.

"Filled with likable, kooky characters, this mystery is fast paced and funny. Lewis's Uncle Jonathan, a sorcerer, and their neighbor, eccentric Mrs. Zimmerman, a kindly witch, add a magical element that is sure to appeal to fantasy fans. Yet, the normalcy of the younger characters allows readers to relate to the protagonists and root for them the whole way through." —School Library Journal