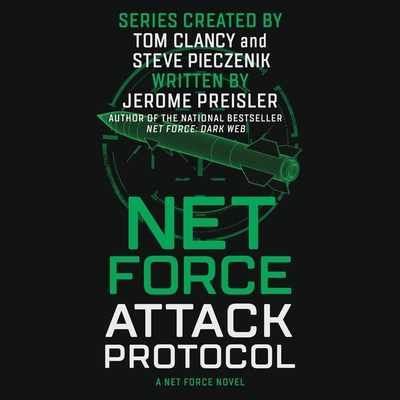 By Jerome Preisler, Tom Clancy (Concept by), Steve Pieczenik (Concept by)
$39.99
In Our Warehouse - Expected arrival in 2-5 days

The cutting-edge Net Force thriller series, created by Tom Clancy and Steve Pieczenik and written by Jerome Preisler reveals the invisible battlefield where the war for global dominance is fought.

In the wake of stunning terrorist attacks around the world, Net Force jumps into action. The president's new cybersecurity agency homes in on a dangerous figure operating in the shadows of the Carpathian mountains. And he's ready to strike again, using the digital space to advance his destructive goals.

But before Net Force can get boots on the ground, the master hacker and his cadre mount a devastating high tech assault against the agency's military threat-response unit. Has a Net Force insider turned traitor? The stakes are suddenly ratcheted higher when a global syndicate of black hat hackers and a newly belligerent Russia hatch an ambitious scheme to plunge the United States into a crippling war--one that will leave Moscow and its Dark Web allies supreme.

Their attack protocol: to seize control of the Internet, and open the door for a modern, nuclear Pearl Harbor...unless the men and women of Net Force can stop them.