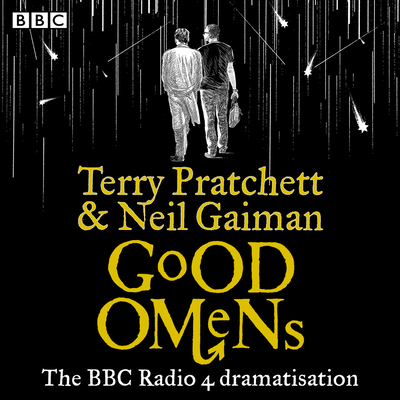 By Terry Pratchett, Neil Gaiman
$36.95
Email or call for price.

A reissue of the successful BBC Radio adaptation of Terry Pratchett & Neil Gaiman’s celebrated apocalyptic comic novel, Good Omens, starring Peter Serafinowicz (Crowley) and Mark Heap (Aziraphale). According to the Nice and Accurate Prophecies of Agnes Nutter, Witch, the world will end on a Saturday. Next Saturday in fact. Just after Any Answers on Radio 4. Adapted, sound designed and co-directed by Dirk Maggs (Neverwhere, The Hitchhiker’s Guide to the Galaxy) this dramatization of Terry Pratchett and Neil Gaiman’s novel features a large cast including Peter Serafinowicz (Shaun of the Dead), Mark Heap (Spaced), Josie Lawrence and Paterson Joseph. Includes outtakes not heard on the radio.

Neil Gaiman is the New York Times-bestselling author of The Sandman, American Gods, and much more. Terry Pratchett is best known for his Discworld series.