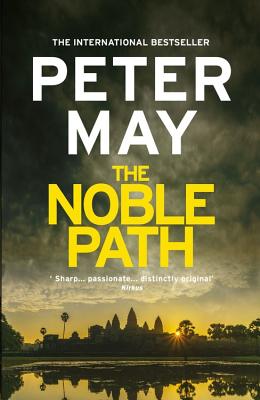 By Peter May
Email or call for price.
Backordered

THE EVIL WRATH
Cambodia, 1978: Amid the Khmer Rouge's crazed genocide, soldier-of-fortune Jack Elliott is given the impossible task of rescuing a family from the regime.
THE PAINFUL TRUTH
Eighteen-year-old orphan and budding journalist Lisa Robinson has received the impossible news that her father is, in fact, alive. His name is Jack Elliott.
THE NOBLE PATH
As Jack tracks the hostages and Lisa traces her heritage, each intent on reuniting a family. Yet to succeed, they each must run a dangerous gauntlet of bullets and betrayal.

One of Scotland's most prolific television dramatists, May garnered more than 1,000 credits over a decade and a half spent as scriptwriter and editor on prime-time British television. Before quitting TV to concentrate on writing novels, he was the creator of three major series, two of which were the highest rated in Scotland. May lives and writes in France.

Praise for The Noble Path

"Peter May's The Noble Path addresses the rippling damage caused by war - to those who do the killing as well as those killed - and later attempts at redemption."—Book Loons

Praise for Peter May
"Richly written . . . May's sense of place is as good as it gets."—Kirkus Reviews

"Peter May is a writer I'd follow to the ends of the earth."—Marilyn Stasio, The New York Times

"May keeps the stories clear and the pace fast."—Booklist, (starred review)

"No one can create a more eloquently written suspense novel than Peter May. His prose evokes a setting that is almost mystical in its untamed beauty."—New York Journal of Books

"May's lyrical prose brings full color to the scenery, and the narrative intrigues from start to finish."—Shelf Awareness