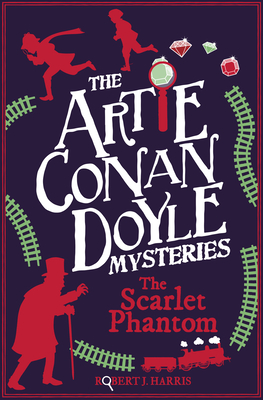 One day Arthur Conan Doyle will create the greatest detective of all - Sherlock Holmes. But right now, Artie Conan Doyle is a twelve-year-old Edinburgh schoolboy with a mystery of his own to solve.

Artie and his best friend Ham are investigating the strange case of the Scarlet Phantom, a jewel thief who seems to walk through walls and disappear at will. But there's a rival detective on the case, a paranormal investigator who claims that only he can capture this phantom thief.

With the help of their new friend, scientist Peril Abernethy, Artie and Ham follow a trail of baffling clues and impossible dangers, but can they catch the Phantom before the invisible fiend pulls off the greatest robbery in history?

Robert J. Harris, author of The World's Gone Loki series and Will Shakespeare and the Pirate's Fire, brings the young Conan Doyle to life in the third installment of this ingenious detective series full of twists, turns and clever reveals.

Robert J. Harris was born in Dundee and now lives in St Andrews with his wife, sons and his dog. He is the author of many children's books, including zany Norse-god trilogy The World's Gone Loki! And two other books in the Artie Conan Doyle series.