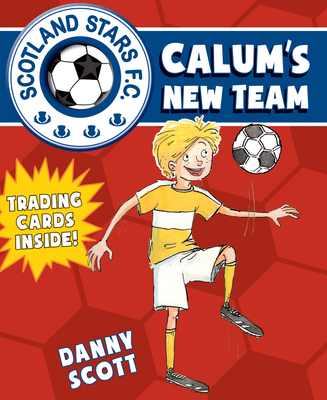 By Danny Scott, Alice A. Morentorn (Illustrator)
Email or call for price.
Not Available at This Time

'There was only one thing for it. Calum took three massive steps forward and threw himself head first at the ball. At full stretch, he nodded the ball goalwards. It flew across the diving keeper and into the back of the net

He lay for a second on the warm Astroturf smiling until a shadow appeared over him.

"I didn't know you could head the ball " Leo grinned down at Calum with his arm outstretched.

"I didn't have much choice with a cross like that " Calum laughed.

Don't miss a minute of the non-stop action as 10-year-old Calum Ferguson struggles to settle into a new town whilst fighting for his place on the school soccer team. Scotland Stars F.C. books are packed with excitement on and off the field, as well as loads of extras like character cards to collect and soccer tips, puzzles and games.

Calum has just moved to Caleytown from the Scottish Highlands and is worried he won't fit in. That is, until he finds out from soccer-mad new pals Leo and Erika that a new boys' football team is starting at school. Calum is determined to impress the coach and make it onto the team, but two things stand in his way: a pair of decent boots, and the coach's son, striker Jordan McPride. . .

Danny Scott, a die-hard football fan, is Digital Marketing Manager for Scottish Book Trust and goalie for Scotland Writers F.C. Alice A. Morentorn is a children's book illustrator and a teacher at Emile Cohl School of Arts in Lyon, France.