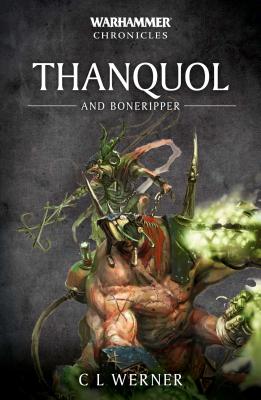 By C L. Werner
Email or call for price.
Not Available at This Time

Follow the tale of Thanquol and Boneripper, heroes of the Skaven, as the End Times draw closer. Expect plenty of duplicity and scheming as we explore their story.

Grey Seer Thanquol is without a doubt (in his mind) the greatest nemesis of the Slayer, Gotrek Gurnisson and his companion Felix Jaeger. He, and his stalwart Rat Ogre bodyguard, Boneripper, have engaged in innumerable nefarious schemes and adventures across the World-That-Was, including…

Claiming the deadly artefact known only as Wormstone to poison the city of Altdorf; the assassination of the Prophet of Sotek in a foreign land of giant lizards and endless jungle; leading an army against the dwarfs of Karak Angkul; and unintentionally finding themselves body-swapped.

Will Thanquol find victory at long last, or will the incompetence of his underlings hold him back yet again?

C L Werner’s Black Library credits include the Age of Sigmar novels Overlords of the Iron Dragon and The Tainted Heart, the novella ‘Scion of the Storm’ in Hammers of Sigmar, the Warhammer novels Deathblade, Mathias Thulmann: Witch Hunter, Runefang and Brunner the Bounty Hunter, the Thanquol and Boneripper series and Time of Legends: The Black Plague series. For Warhammer 40,000 he has written the Space Marine Battles novel The Siege of Castellax. Currently living in the American south-west, he continues to write stories of mayhem and madness set in the Warhammer worlds.