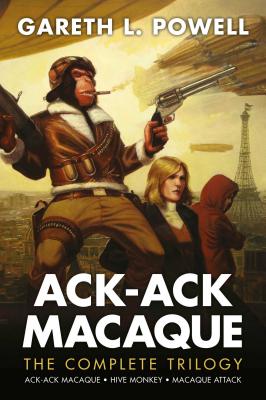 Once, Twice, Three Times a Monkey Life is good for Ack-Ack Macaque. Every day the cynical, cigar-chomping, hard-drinking monkey climbs into his Spitfire to do battle with the waves of German ninjas parachuting over the gentle fields of Kent. But life is not all the joyous rattle of machine guns and the roar of the engine, as Ack-Ack is about to find out... Because it is not 1944. It is the 21st century, in a world where France and Germany merged in the late 1950s, where nuclear-powered Zeppelins circle the globe, where technology is rapidly changing humanity, and Ack-Ack has lived his whole life in a videogame. Ex-journalist Victoria Valois finds herself drawn into a deadly game of cat and mouse with the man who butchered her husband and stole his electronic soul. The heir to the British throne is on the run after an illegal break-in at a research laboratory, and Ack-Ack has been rudely awakened from his game world to find the doomsday clock ticking towards Armageddon... Two unlikely heroes and one mightily pissed-off monkey come together in a sci-fi trilogy full of action, adventure, bananas and bottles of rum. Includes the original Ack-Ack Macaque short story and a brand new epilogue, The Last Macaque.

Gareth L. Powell was born in Bristol, England. He is the author of the recent SF novel Silversands, and the critically acclaimed short story collection, The Last Reef. His work has been published in magazines all over the world and featured in a number of recent anthologies, including Shine (Solaris, 2010). In 2007, his short story `Ack-Ack Macaque' won the Interzone Readers' Poll for best short story of the year. Gareth lives in the English West Country with his wife and two daughters.