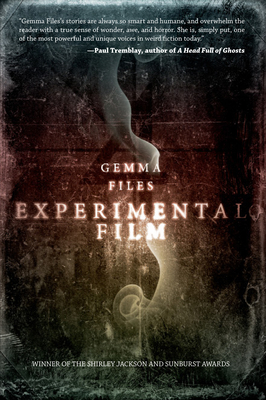 By Gemma Files
Email or call for price.
Not Available at This Time

Fired at almost the same time as her son Clark's Autism Spectrum Disorder diagnosis, former film critic turned teacher Lois Cairns is caught in a depressive downward spiral, convinced she's a failure who's spent half her adult life writing about other people's dreams without ever seeing any of her own come true. One night Lois attends a program of experimental film and emerges convinced she's seen something no one else has--a sampled piece of silver nitrate silent film footage whose existence might prove that an eccentric early 20th-century socialite who disappeared under mysterious circumstances was also one of Canada's first female movie-makers. Though it raises her spirits and revitalizes her creatively, Lois's headlong quest to discover the truth about Mrs. A. Macalla Whitcomb almost immediately begins to send her much further than she ever wanted to go, revealing increasingly troubling links between her subject's life and her own. Slowly but surely, the malign influence of Mrs Whitcomb's muse begins to creep into every aspect of Lois's life, even placing her son in danger. But how can one increasingly ill and unstable woman possibly hope to defeat a threat that's half long-lost folklore, half cinematically framed hallucination--an existential nightmare made physical, projected off the screen and into real life?

Gemma Files is the winner of the International Horror Guild Award and the Black Quill Award. She has been nominated for the Lambda, the Stoker and the Shirley Jackson Awards.