Where Passion Lives: The Spirit of College Football (Hardcover) 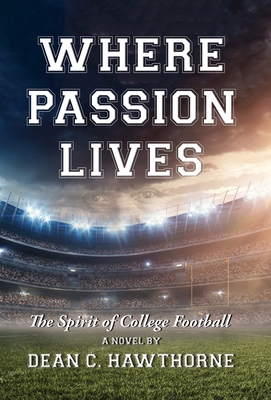 Diehard college football fan Kyle McGinnis is eagerly awaiting the kickoff of a new season when something goes horribly wrong. His accidental death lands his spirit in purgatory, where he meets the true Spirit of College Football-none other than football legend Red Grange.

The Galloping Ghost leads Kyle on an extraordinary adventure deep inside the world of college football. Crisscrossing the country with a spirit's all-access pass, they explore some of the game's greatest moments, traditions, and rivalries in a journey that mortal fans can only dream of.

But it isn't all just fun and games. As Kyle struggles to unravel the mystery of gaining his passage to heaven, the Ghost reveals a long-forgotten place where the two can join forces in a quest that will have an everlasting impact on the fate of college football.

By turns joyous and poignant, this unforgettable story from debut author Dean C. Hawthorne is filled with college football history, a look at both the fun and the trouble spots in today's game, and enough tantalizing "what ifs" to keep college football fans engrossed and entertained for some time to come.

P.S. If you're going to tell a ghost story, who better to have as a lead character than one of the most famous ghosts in history. Red Grange earned football immortality with his jaw-dropping play on the field, which branded him with one of the greatest nicknames in sports and made him famous during his playing career. The passage of time, however, has shrouded a great deal of Grange's incredible legacy.

Record books are filled with the accomplishments of innumerable athletes who have put up eye-popping statistics, but a true distinction of greatness is producing record-shattering results when it counts the most. That was Red Grange - an athlete who delivered some of the most dominant performances in the biggest moments against some of the very best opponents.

Where Passion Lives: The Spirit of College Football is devoted to helping perpetuate the story of Red Grange, reimagined as an integral part of this truly unique, modern-day tribute to our country's greatest sport.