Sherlock Holmes and the Werewolves of Edinburgh: Being Book 2 of the Unpublished Case Files of John H. Watson, M. D. (Paperback) 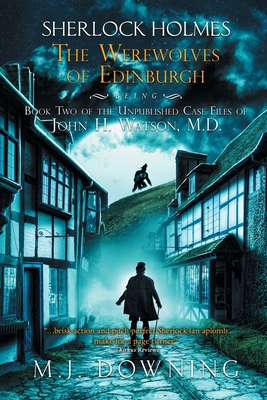 It's December 1888, and for Sherlock Holmes and Dr. John Watson, the cold of winter isn't the only thing that's biting.

Dr. John Watson has long wanted to join Sherlock Holmes in the Logres Society, an ancient group devoted to Arthurian ideals of service and protection of the common people. Founded in the Middle Ages by Geoffrey of Monmouth, with the help of the Knights Templar, The Logres Society's mission is to help those most likely to be harmed by power exchanges between estates and nations. To Dr. John Watson, membership in the Society represents the highest ideals of British manhood. And, perhaps, a chance to reconcile with Mary.

As the date of Watson's investiture into the Society, January 6, the Epiphany, approaches, a series of murders within the Highland Travellers clans strikes. Several clan leaders across the Highlands have been murdered at the same time, and certain valuable artifacts were stolen from them. As Holmes and Watson seek to assist them, the entire Logres Society is plunged into danger. They find themselves under attack by the most dangerous of forces: the forces of magic and the occult.

Holmes and Watson have faced grave danger before, but for Watson, this case is darker than any other. For this time, he suspects treachery from those who have been his closest allies: his fellow members of Department Zed, his beloved wife Mary, and even the great detective himself.

What horror will loom out of the fog-shrouded night to face Watson in a dark battle for the soul of England... and whose face will it wear?