The Earth Was Hers (Hardcover) 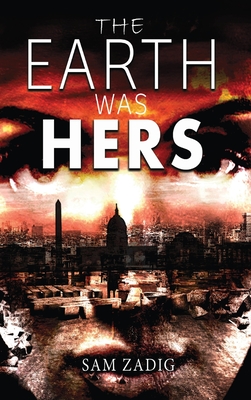 The Earth Was Hers, is an espionage thriller where three young women from very different walks of life, are forced to choose a path of heroism or victimization. Their stories are woven together by dreams and visions, The Earth Was Hers examines the individual responses of Nadia, Emily, and Tamar, to the difficult choices put before them. Choices that will forever affect not only their own lives, but the lives of hundreds of thousands of people. Nadia, a young Afghani woman, known for her bravery and charitable work, is seduced into a new and growing terrorist organization. Emily, an Israeli microbiologist, is tasked with the creation of a vaccine against an insidious biological weapon before it can devastate a large majority of the world's population. Tamar, a member of a Washington bomb squad, must dismantle a nuclear device planted outside the White House grounds before it destroys the nation's capital. Dan Brown fans will enjoy the ornate corruption at the hands of the three clever and deceitful antagonists. Written in gritty, but poetic prose, The Earth Was Hers is both a tale of the triumph of good over evil, and of evil over good. The Earth Was Hers is a new kind of literary novel- part thriller, part fable, based on current political and global narratives. A beautiful Afghani girl is the lone survivor in her family after an attack by the Taliban. With the aid and encouragement of an American social worker, Nadia opens a school for girls and becomes an inspiration to her people. Americans were in love with her, turning her into a viral sensation. Nadia also becomes a target. When she flees to the States to attend a university in Seattle, she is closely watched-including by some people with more far sinister intentions than the media. In Israel, brilliant microbiologist Dr. Emily Rabin is contacted by Mossad. Emily is tasked to create a vaccine to counter a fast-acting biological plague that may be released into the general population by a mysterious underground terrorist organization called the Evoluti. In Washington, DC, the White House is on high alert. The president and his family have been evacuated. Tamar, once a promising artist but now a DC bomb specialist cop, arrives at the scene. If it was a nuclear device, as suspected by the many agents already on-site, her protective suit would do nothing for her. The tentacles of the Evoluti reach far and wide in this novel of intrigue and deceit. Who can be trusted? How can they be stopped?