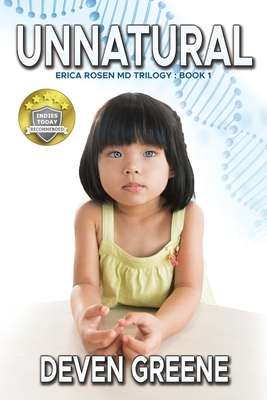 By Deven Greene
Email or call for price.
In Our Warehouse - Expected arrival in 2-5 days

"A fascinating and thought-providing medical thriller about the ethical dilemmas posed by genetic manipulation." -Best Thrillers

Dr. Erica Rosen is perplexed when she sees a young Chinese girl with blue eyes in her San Francisco pediatrics clinic. The girl's mother, Ting, is secretive, and Erica suspects she has entered the country illegally. Later, Erica encounters Ting's son and discovers he has an unusual mutation. Erica learns that Ting's children underwent embryonic stem cell gene editing as part of a secret Chinese government-run program.

The Chinese government wants to murder Ting's son to prevent others from learning about his unusual mutation and the secret gene-editing program. At Ting's urging, Erica heads to China to expose the program and rescue the infant Ting was forced to leave behind, all while attempting to evade the watchful eye of the Chinese government.