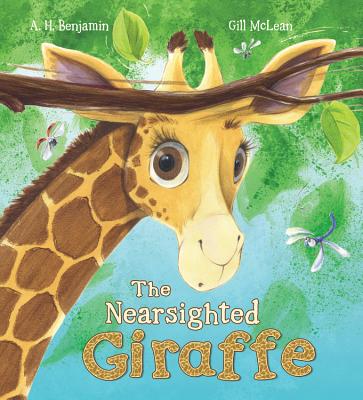 By A. H. Benjamin, Gill McLean (Illustrator)
Email or call for price.
Not Available at This Time

Giraffe can't see very well. But when her animal friends make her a pair of glasses, she decides she would look silly with them!

Instead of wearing them, and to prove to her friends she doesn't need glasses, Giraffe starts putting on protective clothing to stop her hurting herself every time she trips up or stumbles. After a series of mishaps, Giraffe is wearing a helmet, trousers, boots, a rubber ring, a bell and a ladder and the other animals think she looks ridiculous! They put the glasses on her at night, and when Giraffe catches her reflection in the water pool in the morning she is shocked! After taking off all the new clothes, she is left with the glasses - and finds she looks rather smart!

A. H. Benjamin is the author of more than 20 books for children. He started writing in the mid-1980s and had several stories published in storybooks, magazines and annuals. His work has been translated into over 20 languages including Greek, Arabic, Turkish and Korean and has also been adapted for radio, television and theatre. He is married with four grown-up children, who have been his inspiration, his audience and also his best friends.

Gill McLean worked as a children's book designer before turning to illustration work. She is the illustrator of several popular children's books, including the QED Storytime Blast Off! Her fun animal characters and beautiful painting style make her illustrations unique.