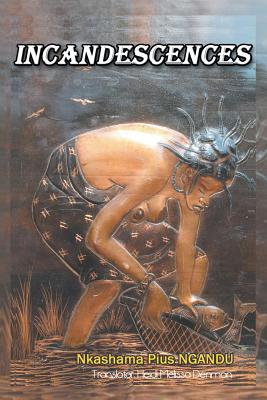 Incandescences "Pedro dreamed, so intensely. He would rebuild his father's house, stitch up the straw roof, and repair the charred walls. He would provide him with a comfortable home, built from hard stone, which would never be tossed about during hurricanes or storms during monsoon seasons. The entry doors will be pointed eastward. There, where the sun beams down its first rays, still hot from the warmth of the earth's belly. Pedro's trophies would be suspended from the ceiling, from which he would hang shimmering parrots' feathers and a scepter studded with cowrie shells and golden thumbtacks. A huge drum covered with buffalo skins held in place by small steel-headed nails will have the place of honor in the corner. Leopard skins will represent the highest rung of his lineage. His mother would reign in the middle of a large courtyard planted with avocado, blossoming mandarin orange, and thick chestnut trees. The cheeks of the one who gave him life would be coated with soft creams. She will smile with pleasure, strong in the shade of almond trees. Nkashama Pius Ngandu is from the Democratic Republic of Congo and has been a professor of literature in Algeria (Annaba-Constantine), France (Limoges, Paris Sorbonne-Nouvelle), and is currently at Louisiana State University, Baton Rouge, Louisiana. Publisher's Website: http: //sbprabooks.com/NkashamaPiusNgandu.