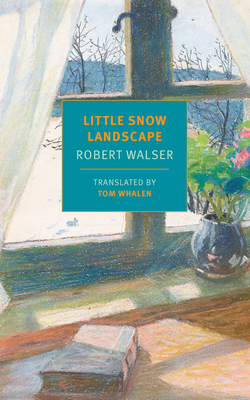 A collection of previously unpublished short prose by one of the most influential figures of twentieth-century fiction.

Little Snow Landscape opens in 1905 with an encomium to Robert Walser’s homeland and concludes in 1933 with a meditation on his childhood in Biel, the town of his birth, published in the last of his four years in the cantonal mental hospital in Waldau outside Bern. Between these two poles, the book maps Walser’s outer and inner wanderings in various narrative modes. Here you find him writing in the persona of a girl composing an essay on the seasons, of Don Juan at the moment he senses he’s outplayed his role, and of Turkey’s last sultan shortly after he’s deposed. In other stories, a man falls in love with the heroine of the penny dreadful he’s reading (and she with him?), and the lady of a house catches her servant spread out on the divan casually reading a classic. Three longer autobiographical stories—“Wenzel,” “Würzburg,” and “Louise”—brace the whole. In addition to a representative offering of Walser’s short prose, of which he was one of literature’s most original, multifarious, and lucid practitioners, Little Snow Landscape forms a kind of novel, however apparently plotless, from the vast unfinishable one he was constantly writing.

Robert Walser (1878–1956) was born into a German-speaking family in Biel, Switzerland. He left school at fourteen and led a wandering, precarious existence while writing poems, novels, and vast numbers of the “prose pieces” that became his hallmark. In 1933 he abandoned writing and entered a sanatorium—where he remained for the rest of his life.

Tom Whalen is a novelist, short-story writer, poet, critic, and the co-editor of the Robert Walser issue of the Review of Contemporary Fiction.

“Everyone who reads Walser falls in love with him.” —Nicholas Lezard, The Guardian

“Walser shows a delightful disregard for the established boundaries between reader and writer. Sometimes he hardly seems to be writing at all, but rather carrying on a conversation with himself, or simply spilling his thoughts onto paper. . . . His eyes are forever fresh, his mind never weary.” —A. M. Kaempf, Los Angeles Review of Books

“[Robert Walser writes] with much softness, dreaminess, freedom, and the moral richness of one of those seemingly unprofitable, lazy days.” —Robert Musil

“Walser was a favorite of Kafka, Musil, Mann and Sebald, beloved in part for what Hermann Hesse, another admirer, called the ‘pure, sweet and ethereal’ music of his prose. His miniatures account for some of the most sublimely joyful writing of the past century.” —Sam Sacks, The Wall Street Journal