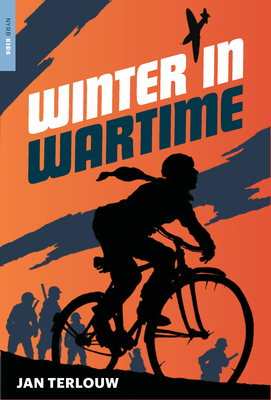 By Jan Terlouw, Laura Watkinson (Translated by)
$12.99
In Our Warehouse - Expected arrival in 2-5 days

A gripping and fast-paced adventure story about one boy's life-threatening mission to support the secret resistance in Nazi-occupied Netherlands, based on the author's own childhood in Holland during World War II.

It's the winter of 1944-45, and Michiel's country has been at war since he was eleven. Now he's fifteen, and his country is under Nazi occupation, including the town where Michiel lives and where his father is the mayor. No longer able to attend school, Michiel spends his days running urgent errands on his bicycle, avoiding Allied bombers and German soldiers alike. Then one day, his friendship with Dirk, the neighbor's older son and a member of the secret underground, involves him in the care of a wounded British pilot. When a German soldier is found murdered and the townspeople are blamed for his death, Michiel's already-risky mission turns life-threatening. Winter in Wartime is a fast-paced and exciting novel, which has never been out of print in the Netherlands since it was first published, nearly fifty years ago. Based on the author's own boyhood in wartime Holland, the action and adventure of Michiel's mission makes for a gripping read, while the anguish of his experience underscores the ultimate anti-war tenor of the novel.

Jan Terlouw was born in the Netherlands in 1931. He worked as a nuclear physicist in countries across the world before entering politics as a representative of the Dutch D66 party in 1971. Alongside his political career he has written many successful children's books, including Winter in Wartime, which was based on his own memories of the Nazi occupation. It won the Golden Pen Prize for the best Dutch children's book in 1973 and has since been adapted for film and stage.

Laura Watkinson is a full-time translator from Dutch, Italian, and German. She lives in Amsterdam.

" [A] new translation of this fast-paced story about a small-town mayor’s son who gets tangled up with the underground resistance....Harrowing and well-plotted, this antiwar novel for readers ages 10-15 casts light on a seldom-visited corner of the European Theater." —Meghan Cox Gurdon, Wall Street Journal Weekend


"Originally published in Dutch in 1973 and newly translated here, this gripping tale of conspiracy and humanity is based on the author's childhood memories of the war. Suspenseful third-person narration provides historically and culturally specific details along with insight into Michiel's inner thoughts. The contradictions and the horrors of war are laid out in succinct, powerful prose. Winding to a quiet yet satisfying ending, Terlouw laments the never-ending cycle of war. . . . A nuanced perspective on World War II and a testament to the power of a young person to resist.” —Kirkus Reviews

"Offers a compelling look at the effects of war on both individuals and on an entire town . . . leaving the reader with a strong sense of the inner fortitude and courage necessary for survival when people are devastated by a brutal war." —Horn Book

"A vivid, captivating portrait of life and resistance during the German occupation in the Netherlands. The strength and courage of the characters is sure to inspire a new generation of readers." —R.M. Romero, author of The Dollmaker of Krakow

"A fine book, supremely well written, that takes us back to a time, not that long ago . . . A terrible winter of hunger and occupation and war. It’s a book we should all read, to remind us never to take our freedom and peace and plenty for granted." —Michael Morpurgo, author of War Horse

"This exciting book has long been considered a classic in Holland. And anyone who has read this moving, powerful story can understand why." —Stiftung Lesen