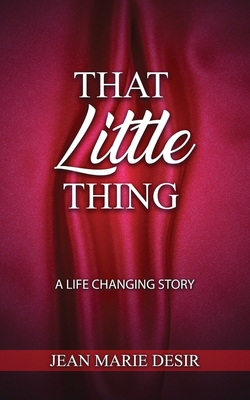 It was a story only God could have orchestrated. When Daniel held the hand of young Jackie during a Christian singles' conference in Atlanta, there was no denying that a spark was there. However, years later they are divorced from one another and celebrating the high school graduation of their only daughter, Ananie. Though Ananie is happy that her parents are there together to recognize her achievement, she can't help but see feelings still linger between them. But what changed? In the new book by author Jean Marie Desir, That Little Thing, this real-life story with fictional elements characterize what it means to be a woman of God in a society driven by sex, popularity, and image. Spurred on by an unfortunate experience in his public speaking course, when he tried to share a speech about female sexuality and empowerment to an unfavorable audience, Jean Marie wanted to make sure his message on moral values for young women wasn't lost on those who needed to hear it. In the story, Ananie wants to know why her parents divorced if they were, clearly, still in love. After much thought, Jackie decides to share with Ananie that she wasn't completely honest with Daniel when they were seriously dating and her wild past of sex, drugs, and alcohol later caught up to her. Though their marriage ended, they stayed committed to raising Ananie as an upstanding, godly woman, one who wasn't afraid to be herself even when ridiculed by others. She even gets her opportunity to witness to one of her former bullies, Stacey, at her house one weekend, impacting Stacey and her own relationship with her mother in several ways. Yet the question remains: If Daniel and Jackie still have feelings and loving spending time with one another and their daughter, is a second chance still possible for their relationship?