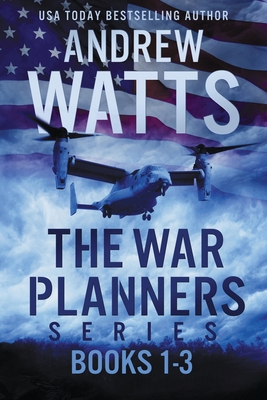 THE BALANCE OF GLOBAL POWER HAS SHIFTED.

THE NEXT WORLD WAR IS ABOUT TO BEGIN.

"I honestly don't remember a storyline that has so completely captured me in this genre before..."

From a secretive jungle-covered island in the Pacific, to the sands of the Middle East. From the smog-filled alleyways of China, to the passageways of a US Navy destroyer. The War Planners series follows an elite group of the military and intelligence personnel as they uncover a Chinese plot to begin the next world war, and attack America.

A CIA agent leads a secretive group of American military and intelligence experts tasked with stopping a Chinese invasion. But technologist David Manning soon discovers that not every one of them intend for America to win...

A US Navy destroyer sinks an Iranian patrol craft during a controversial exchange in the Persian Gulf. With tensions soaring between the two nations, an Iranian politician secretly contacts the CIA with a chilling revelation involving the Chinese.

Book 3: Pawns of the Pacific

A CIA operative joins a Marine special operations team to infiltrate a secret Chinese base in the jungles of South America. A female navy helicopter pilot is thrown in charge of her destroyer when an unthinkable catastrophe strikes. And the Admiral of America's newest aircraft carrier strike group must save his daughter from a Chinese naval attack.

Praise for Andrew Watts and The War Planners series:

★★★★★ "I have just started reading Andrew Watts book. I have found them hard to put down. It's gripping like Tom Clancy and Lee Child's book. Give it a go."

★★★★★ "I liked this book a lot. I am a fan of Tom Clancy and James Patterson books and this book is as good as any of theirs. Watts starts with a chilling premise and crafts a storyline with enough detail and realism to make you believe it just might be possible. I look forward to the next in the series."