Into the Devil's Den: Snared by Their Own Lies (Paperback) 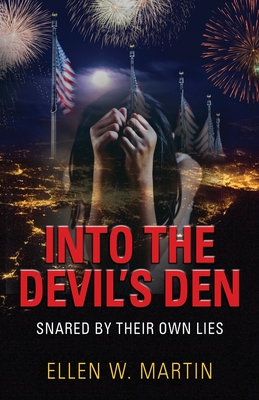 For over twenty-years Sam Steele lived with a lie gnawing at his conscience - for twenty-years his only child believed her mother was dead. Without warning his ex-wife springs from the ashes of the past and reaches out to him in his capacity as a veteran Immigration Custom Enforcement agent.

When Sam's ex-wife dumps a father's living nightmare into his lap, he must choose between doing his duty as a law enforcer and jeopardizing his cherished relationship with his daughter. Circumstances beyond his control leave him no choice. Before he can seek forgiveness, TERRI ANNE disappears. Sam neglects his duties as an ICE agent and becomes obsessed in finding her. In the wake of his search he discovers a trail of murder, illegal Green Card marriages, and unveils a jihadist's plot to launch a terror attack on American soil. Truth and time are ICE agent SAM STEELE'S enemy.

SYLVIA MAROUN, the ex-wife, is a self-absorbed middle-aged woman with an appetite for young foreign men. Money and her sexuality have always been the solution to her problems. Sylvia becomes mired in a predicament she can't buy her way out of and is unprepared for the reality of her young husband's latest love interest. She will face the sins of her past.

TERRI ANNE is a young na ve college student with above average book smarts, but lacks a thimbleful of common sense. These characteristics combined with the desire to escape the confines of a smothering and overprotective father will land Terri in the middle of murder and into the arms of a terrorist sleeper cell.

MAGGIE O'MALLEY is Sam's spunky assistant and lover for twelve years who has a difficult time keeping her thoughts to herself. She harbors a secret past she hopes will help Sam unravel the disappearance of his daughter. In her zealous attempt to save the day she not only jeopardizes her relationship with Sam, but also her own life.

RASHID MAROUN is an impulsive, charming, narcissist playboy who successfully arranges Green Card marriages. On the surface, his main motivations are money and a good time. Beneath that glitz lurks a cunning villain looking for an escape from his rich wife and fanatical cousin, Jaali.

JAALI DIAAB is a renegade and impatient radical who is rejected by the inner circle of jihadists. He is determined to prove to the world that there are other warriors besides Al Qaida, Hamas, and Isis that can strike a blow in the heart of the Great Satan. When his foolish cousin, Rashid, becomes involved in murder, it jeopardizes the mission he has been planning for months.

INTO THE DEVIL'S DEN weaves a tangled tale of suspense, murder, and treachery. Each twisted circumstance is triggered by the one (albeit well intentioned) lie Sam Steele told his daughter - a lie that erupts into more lies and leaves lives dangling by a single thread.