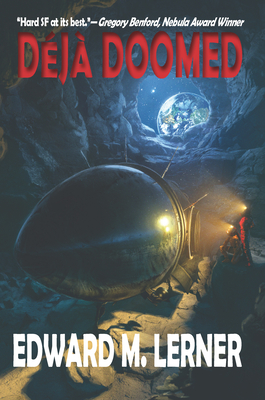 Holy crap, this is a great book.--Sci Fi Saturday Night

On the Moon's far side, shielded from Earth's radio cacophony, Americans are building a radio-astronomy observatory. Russians sift the dust of a lunar "sea" for helium-3 to run future fusion reactors. Commercial robots, remotely operated from Earth, roam the Moon's near side in a hunt for mineral wealth. Why chase distant asteroids for precious metals? Onetime asteroids must lie close beneath the much-bombarded lunar surface.

Then a prospecting robot encounters a desiccated, spacesuited figure. An alien figure ....

Americans from the lunar observatory investigate. Near the original find, underground, they discover an alien installation. Lunar Russians, realizing that the Americans are up to something clandestine, send their own small team. Each group distrusts the other ... even before the fatal "accidents" begin. By the time anyone suspects what ancient evil they have awakened, it may be too late--

For everyone on Earth, too.

EDWARD M. LERNER worked in high tech and aerospace for thirty years, as everything from engineer to senior vice president, for much of that time writing science fiction as his hobby. Since 2004 he has written full-time. His novels range from near-future technothrillers, like Small Miracles and Energized, to futuristic mysteries, like The Company Man, to such traditional SF-adventure fare as Dark Secret and his InterstellarNet series. Collaborating with Larry Niven, Lerner also wrote the space-opera epic Fleet of Worlds series of Ringworld companion novels. His 2015 novel, InterstellarNet: Enigma, won the inaugural Canopus Award "honoring excellence in interstellar writing." His fiction has also been nominated for Locus, Prometheus, and Hugo awards. In shorter forms, Lerner's writing has appeared in anthologies, collections, and many of the usual SF magazines and websites. He also writes about science and technology, most notably including Trope ing the Light Fantastic: The Science Behind the Fiction.