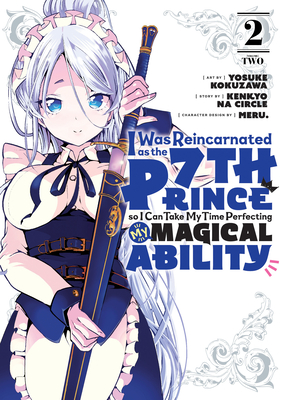 Prince Lloyd wasn't always a prince...in a previous life, he was a sorcerer, of sorts. So when he was forced to reincarnate, he decided to continue his studies, prince of the realm or no! But his new life has its own sets of challenges...including being a 10-year-old! What's the 7th prince/sorcerer to do?!

In his previous life, Prince Lloyd was a penniless peasant. But since reincarnating as a prince with immense magical power, he can finally focus on his life-long passion: sorcery!

Prince Lloyd's experiments with weapon enchantment are a success. With the might of his suped-up swords backing them, Lloyd, his older brother, Albert, and his maid, Sylpha, embark on a monster-hunting expedition, only to find something sinister waiting for them...

Kenkyo na Circle is a Japanese web novelist who debuted in 2015 with the fantasy story Kouritsuchuu madoushi, daini no jinsei de madou wo kiwameru, which was later popularized and adapted into a manga. The author has since written several other fantasy action adventures, and I Was Reincarnated as the 7th Prince, So I'll Take My Time Perfecting My Magical Ability is the first one to be published in English.


Yosuke Kokuzawa debuted in Kodansha's Bessatsu Shonen Magazine in 2009 with Choujin gakuen: konton mouryou seishun jihen, and has since published two additional short series. I Was Reincarnated as the 7th Prince, So I'll Take My Time Perfecting My Magical Ability is the author's first collaborative project as an illustrator to adapt the popular web novel series to manga form, as well as the first work to be published in English.