The Last Platoon: A Novel of the Afghanistan War (Hardcover) 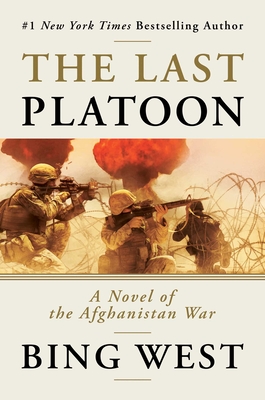 As seen on CBS This Morning Saturday!

A platoon of Marines and CIA operatives clash in a fight to the death with the drug lords and the Taliban, while in Washington, the president seeks a way out.

A small team of CIA operatives and Marines commanded by Captain Diego Cruz are protecting a tiny base in Helmand—the most violent province in Afghanistan. In a series of escalating fights, Cruz must prove he is a combat leader, despite the growing disapproval of the colonel in overall charge. At the same time, the president has ordered the CIA to capture a drug lord. But with a fortune in heroin at stake, the Taliban joins with the drug lord to wipe out the base. As the president negotiates a secret deal, Cruz must rally the Marines to make a last stand. Bringing you into America’s longest war with vivid immediacy, The Last Platoon portrays how leaders rise or wilt under intense pressure. A searing, timeless story of moral conflict, savage combat, and feckless politics.

A former assistant secretary of defense and combat Marine, New York Times bestselling author Bing West has written a dozen books from the frontlines about our wars in Vietnam, Iraq, and Afghanistan. He also co-authored the New York Times #1 bestseller, Call Sign Chaos: Learning to Lead with General Jim Mattis.

“Bing West knows combat, the Corps, and the infantry. He is also a masterful storyteller. In The Last Platoon he gives us a raw, passionate feel for what warriors go through on the ground and the price they pay in blood to try to accomplish ill-thought-out missions.”
— General Anthony C. Zinni, USMC (Retired)

“Among the many virtues Bing West brings to any military/political enterprise is that he knows his shit from the level of the grunt in the foxhole to the SecDef in the Situation Room. He has been there. He has done that. Every page of The Last Platoon radiates authenticity, whether it’s the chaos and carnage of a firefight in Afghanistan or the kitchen-table back-and-forth between a Marine husband and wife on the eve of a deployment. And the man can write! If you’ve only read Bing West’s nonfiction (which is universally five-star), you will sit back with satisfaction seeing that he doesn’t drop a step shifting into the realm of the novel. The Last Platoon reads like a cinematic thriller with nonstop action and conflict, but it is also informed on every page by the maturity and depth of understanding of a Marine combat officer, a war journalist, and a former assistant Secretary of Defense, who has been in the tall grass for decades and has seen and done it all. The Last Platoon is dark because its subject matter—the folly and arrogance of those at the strategic level and the price in blood that young men and women have to pay at the tactical—is grim and permanent. I read it in one sitting, and I will read it again.”
— Steven Pressfield, Bestselling Author of Gates of Fire and The Legend of Bagger Vance

“Combat veteran, historian, and front-line war correspondent Bing West writes a graphic odyssey into the tragic absurdity of the Americans’ twenty years in Afghanistan—a gripping paean to those brave men who fought there and survived the ordeal with dignity.”
— Victor Davis Hanson, Author of Carnage and Culture and The Second World Wars

“I rarely read fiction books, but when Bing West writes one I know that it will be a page turner. This one is no exception! Bing knows his subject matter like no one else does and writes in a way that draws you in as if you were there. Once I started it, I couldn’t put it down until it was finished. I highly recommend this book!”
— Major General Ray “E-Tool” Smith, USMC (Retired), Navy Cross recipient, Hue City, 1968

“Bing West is one of America’s great combat writers. Whether penning history or action fiction, he knows what it is like to be out on the pointy end because he has ‘been there and done that.’ In The Last Platoon, West tells the story of our Nation’s Warriors with the hard, tough, and factual clarity ground combat is and will likely remain. A team of individuals, overcoming their fears and emotions, working together to accomplish a tough tactical mission, which becomes intertwined with politics, international relations, and the complexity of the inter-agency. But that’s what war is, right? Thanks Bing for reminding us of what it is to serve well and honorably.”
— General Robert B. Neller, USMC (Retired) 37th Commandant of the Marine Corps

"One of the most powerful books this year."
— CBS Saturday Morning

"The characters will always be with me. Magnificent. The best argument I've encountered for our misadventure in Afghanistan."
— Robert D. Kaplan, author of "The Revenge of Geography"

"This is the most important book you will ever read about the nature of an Afghan battle."
— Jim Cramer, Host, Mad Money