Lions of the Sky: The Top Gun for the New Millennium (Paperback) 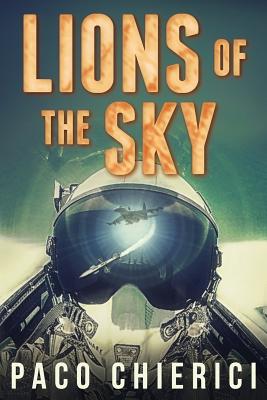 In the world of fighter pilots, the most alpha of the alpha, competition is everything and the stakes are impossibly high. A Top Gun for the new millennium, LIONS OF THE SKY propels us into a realm in which friendship, loyalty, and skill are tested, battles won and lost in an instant, and lives irrevocably changed in the time it takes to plug in your afterburners.

Sam Richardson is a fighter pilot's pilot, a reluctant legend with a gut-eating secret. He is in the last span of his tour as an instructor, yearning to get back to the real action of the Fleet, when he is ordered to take on one last class-a class that will force him to confront his carefully quarantined demons.

Brash, carefree, and naturally gifted, Keely Silvers is the embodiment of all that grates on him. After years of single-minded dedication, she and her classmates can see the finish line. They are months away from achieving their life-long dream, flying Navy F/A-18 fighters. They are smart and hard-working, but they're just kids with expensive new toys. They're eager to rush through training and escape to the freedom of the world beyond, a world they view as a playground full of fast jets and exotic locales.

But Sam knows there is a darker side to the profession he loves. There is trouble brewing in the East with global implications. If they make it past him they will be cast into a dangerous world where enemy planes cruise the skies over the South China Sea like sharks, loaded with real weapons and hidden intentions.

In the world of fighter pilots, the most alpha of the alpha, competition is everything and the stakes are impossibly high. A Top Gun for the new millennium, LIONS OF THE SKY propels us into a realm in which friendship, loyalty, and skill are tested, battles won and lost in an instant, and lives irrevocably changed in the time it takes to plug in your afterburners.

Paco Chierici has written a humdinger of a book. Through vividly drawn characters, he takes us inside a Navy fighter squadron showing their incredibly difficult day to day lives, including the obstacles women still face in this tight knit community....a terrific window into a world very few people see.-The Honorable Ray Mabus, 75th United States Secretary of the Navy Lions of the Sky is gripping, fast paced, and authentic. If you want a real, edge of the envelope thriller, look no further - Brandon Webb former Navy SEAL, pilot and New York Times Bestselling author I was absolutely catapulted into the action Paco put me right back in the cockpit and the Ready Room. Lions of the Sky is intense, and personal, and thrilling. A must read -Lea Gabrielle, Journalist and F/A-18 Naval Aviator In this fast paced, riveting and suspenseful novel about superpower conflicts, Paco vividly depicts the heroism of Navy pilots from training to deployment. His strong story telling skills propel readers from zero to 450 knots in the very first few pages. Throughout, Paco presents a profound and dynamic view of the dangers of war and the challenges the Navy has in integrating women, fully, and equally into the most elite portion of our armed forces--Carrier Fighter Pilots. This is an outstanding read and one I very highly recommend.-Max Kennedy. Author of Make Gentle the Life of This World: The Vision of Robert Kennedy and Danger's Hour: The Story of the USS Bunker Hill and the Kamikaze Pilot Who Crippled Her.