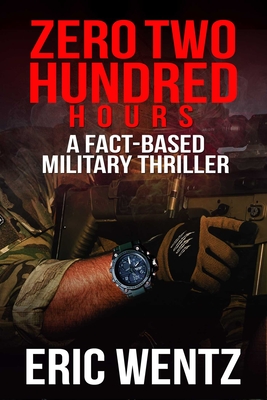 A high stakes game of death, honor, and conviction, Zero Two Hundred Hours throws you into the midst of an all-out war against terror. Set against Cuba’s Guantanamo Bay, Navy Seal Grant Chisolm has only one chance to prevent the impending Al-Qaeda attack. The clock is ticking…

BLOOD, LOYALTY, AND THE ULTIMATE SACRIFICE – WELCOME TO THE MACHINATIONS OF WAR!

Intelligence received about a joint-terrorist operation in Guantanamo Bay, Cuba will set in a motion a riotous, whirlwind sequence of events, with geographic repercussions spanning from the ornate palaces of Turkey, to the cerulean waters of the Caribbean. With so much on the line, the question remains: what would you be willing to give up to protect those that you love?

For Navy SEAL, Grant Chisolm, the answer is simple: everything.

In his exciting new work, Zero Two Hundred Hours, twenty-six year veteran of the U.S. Navy, Eric Wentz portrays an eerie picture of the complicated tapestry that is international relations. His explosively charged prose - drawing directly from his work as an intelligence officer, interrogator and linguist - will grab you from the first page, and drag you with both hands into the darker designs of the human psyche.

Follow Grant Chisolm’s descent into the fog war to discover:

A veritable crash course in world history, military strategy, and the psychology of warfare, Join Eric Wentz as he takes you on an unforgettable, literary journey!

Are you willing to answer the call?! - Grab your copy of Zero Two Hundred Hours today!