Newark Minutemen: A True 1930s Legend about One Man's Mission to Save a Nation's Soul Without Losing His Own (Paperback) 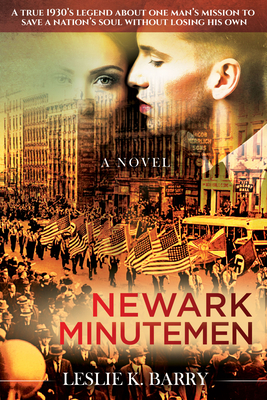 #1 bestseller and soon to be motion picture, Newark Minutemen has bridged generations. The epic based-on-true story of forbidden love and unholy heroism is set against the backdrop of an America ripped apart by the Great Depression and on the brink of war.

Newark, NJ, 1938. Millions are out of work and robbed of dignity. A shadow Hitler-Nazi party called the German-American Bund that is led by an American Fuhrer threatens to swallow democracy. In this dangerous time of star-spangled fascism, a romance forms between the Jewish boxer, Yael and the daughter of the enemy, Krista. But 1930s America pulls them apart as Krista's people want Yael's dead. Then Yael is recruited by the mob to go undercover for the FBI against her people and bring down the German-American Bund. Author Leslie K. Barry captures an authentic and brave portrait of a lost America searching for identity, preserving legacy and saving its soul. It is a heartbreaking novel that crosses generations as it honors the fragility of freedom.