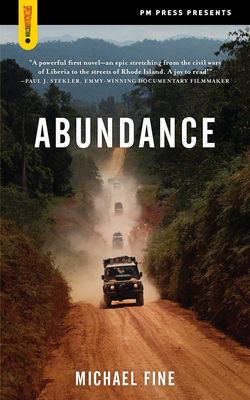 By Michael Fine
Email or call for price.
Not Available at This Time

Julia is an American medical doctor fleeing her own privileged background to deliver health care to remote African communities, where her skills really make a difference. Carl is also an American, whose experiences as a black man in the United States have led him to volunteer in Africa. The two come together as colleagues (and lovers) as Liberia is gripped in a brutal civil war. Then Julia is kidnapped and Carl is “rescued” and evacuated against his will by U.S. Marines. Back in the U.S., Carl turns to a Rhode Island doctor who has been a mentor to them both. With the help of a smuggler, they return to Africa illegally and begin the dangerous work of finding and rescuing Julia. This is an unforgettable thriller grounded in real events. A short preface and several appendices add background on Liberia’s complex U.S.-linked history, and a glossary illuminates Liberia’s Kreyol patois.

A former director of the Rhode Island Department of Health, Michael Fine has been a writer, community organizer, family physician, and public health official for more than 40 years. In addition to his book Health Care Revolt, he has published widely in the medical literature, mostly about health policy. He served as a medical officer for Kenya and worked as a volunteer during the Liberian Civil War, the subject of Abundance, his first novel.

“Much like Norman Maclean’s later-in-life masterpiece, A River Runs through It, Michael Fine’s Abundance, written after a distinguished career of medical practice here in the U.S. and in Africa, is a powerful first novel, an epic stretching from the civil wars of Liberia to the streets of Rhode Island. It’s about the violence we practice on each other and the power of humanity to overcome it. A joy to read.” —Paul J. Stekler, Emmy-winning documentary filmmaker

“Michael Fine is one of the true heroes of primary care over several decades.” —Dr. Doug Henley, CEO and executive vice president of the American Academy of Family Physicians

"As Rhode Island’s director of health, Dr. Fine brought a vision of a humane, local, integrated health care system that focused as much on health as on disease and treatment.” —U.S. Senator Sheldon Whitehouse


"The sparsely simple prose evokes a thriller-esque take on Ernest Hemingway, especially combined with the kind of setting “Papa” was known for taking on. A thinking man’s thriller that makes Fine, a physician who was formerly director of the state Department of Health, the Ocean State’s own John le Carré." —Jon Land, Providence Journal

"Abundance is a realistic tour-de-force of survival in a failed state rife with warlords and child soldiers answerable to no one, where ordinary people struggle to get on with their lives in a society run by naked power exerted through machine guns. Fine’s skill as a raconteur makes the novel seem as if he is your personal tour guide through chaos and civil war, but with a very hopeful and optimistic outlook." —Michael Bilow, https://motifri.com/books-summer2019/