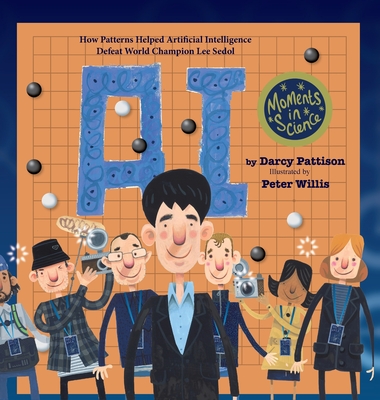 The stage was set for a showdown: Man v. Machine.

On March 9, 2016, the AlphaGo artificial intelligence computer program played the board game, GO, against the world champion, Lee Sedol.

The Game: Go is the oldest board game in the world. Games are perfect tests for A.I because they keep score. It's easy to see when the A.I. is improving.

The Man: Korean Lee Sedol was the world's top Go player. He expected to win all five games of the match. Could the A.I. teach him anything?

The Machine: Developed in 2014, AlphaGo was a computer artificial intelligence program designed to play Go by using deep learning to recognize patterns in the game. It had already beaten the European champion. Could it defeat Sedol?

The exciting historic meeting of minds unfolded across five difficult games. This story introduces concepts of artificial intelligence and helps kids understand the challenges and the promise of working with A.I.

This exciting series focuses on small moments in science that made a difference.

- ECLIPSE: How the 1919 Eclipse Proved Einstein's Theory of General Relativity