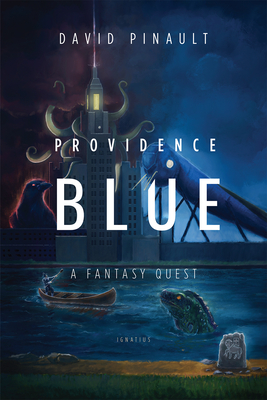 At his typewriter in little Cross Plains, Texas, Robert E. Howard created big characters—Bran Mak Morn, Solomon Kane, Conan the Barbarian—who shaped the art of fantasy fiction for generations. But Howard would never know it. On June 11, 1936, at the age of thirty, he shot himself outside his country home. Why would he do it, and where could death have taken him?

Providence Blue imagines the strange underworld journey of Howard after his suicide, through Texas  flatlands, ancient Egyptian ruins, and New England city gutters. Meanwhile, as his girlfriend Novalyne Price investigates what caused the tragedy, she is led to Providence, Rhode Island, home of the horror writer H. P. Lovecraft, where she makes a terrifying, life-changing discovery.

In Providence decades later, aging grad student Joseph Bonaventure struggles to finish his dissertation on Lovecraft. When he and a young librarian, Fay O'Connell, chance upon some of the author's lost papers, this breakthrough locks both of them in a web of black magic, occult conspiracy, and dark cosmic forces—and ties them intimately to the fate of Robert E. Howard. Alongside a cast

David Pinault, Ph.D., is a Professor of Religious Studies at Santa Clara University. He is the author of the acclaimed work The Crucifix on Mecca's Front Porch. His other publications include Notes from the Fortune-Telling Parrot, The Shiites: Ritual and Popular Piety in a Muslim Community, and the novel Museum of Seraphs in Torment.