Honda: The Boy Who Dreamed of Cars (Paperback) 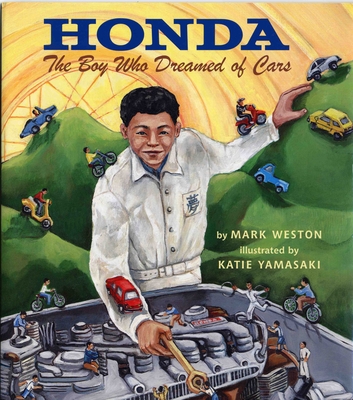 By Mark Weston, Katie Yamasaki (Illustrator)
$10.95
In Our Warehouse - Expected arrival in 2-5 days

One day in 1914 when Soichiro Honda was seven years old, an astonishing, moving dust cloud appeared in his small Japanese town. The cause was a leaky, noisy automobile-the first the boy had ever seen. At that moment Honda fell in love with cars, and a dream took hold. He would one day make them himself.

It took Honda many years to reach his goal. Along the way he became an expert mechanic and manufacturer of car parts. After World War II he developed a motorized bicycle, the forerunner of his innovative motorcycles. Eventually Honda began manufacturing cars, first race cars and then consumer cars. Constantly seeking ways to make his products better than his competitors', Honda grew into a global industry leader.

Soichiro Honda had an inventive mind and a passion for new ideas, and he never gave up on his dream. A legendary figure in the world of manufacturing, Honda is a dynamic symbol of lifelong determination, creativity, and the power of a dream.

This is Katie Yamasaki's first book.

MARK WESTON was inspired to write a children's book about Soichiro Honda after the extensive research he did for his highly praised adult book about pioneering men and women of Japan, called Giants of Japan. A former attorney, journalist, and Jeopardy! champion, Weston is now a full-time writer. He lives with his wife in Sarasota, Florida. Katie Yamasaki is an illustrator, author, muralist, fine artist, and teaching artist. Growing up in the "car culture" of Detroit, Yamasaki had an immediate connection to Honda's story. Yamasaki comes from a huge, diverse family that is full of (among many other things) artists and teachers. She lives in Brooklyn, New York.