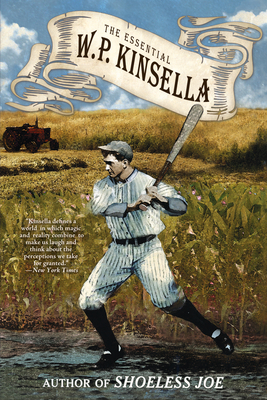 This career retrospective celebrates the 80th birthday of baseball's greatest scribe, W. P. Kinsella (Shoeless Joe), as well as the 25th anniversary of Field of Dreams, the film that he inspired. In addition to his classic baseball tales, W. P. Kinsella is also a critically-acclaimed short fiction writer. His satiric wit has been celebrated with numerous honors, including the Order of British Columbia. Here are his notorious First Nation narratives of indigenous Canadians, and a literary homage to J. D. Salinger. Alongside the real story of the 1951 Giants and the afterlife of Roberto Clemente, are the legends of a pirated radio station and a hockey game rigged by tribal magic. Eclectic, dark, and comedic by turns, The Essential W. P. Kinsella is a living tribute to an extraordinary raconteur.

W. P. Kinsella is the author of Shoeless Joe, which was later adapted into the feature film Field of Dreams. His other novels include The Iowa Baseball Confederacy, Box Socials, and Butterfly Winter, and his short story collections include Dance Me Outside, The Fencepost Chronicles, and The Thrill of the Grass. Mr. Kinsella, widely considered one of the great baseball writers, is also known for his eclectic short fiction, including his award-winning and controversial First Nation stories, humorous and gritty tales of the complex lives of indigenous Canadians.