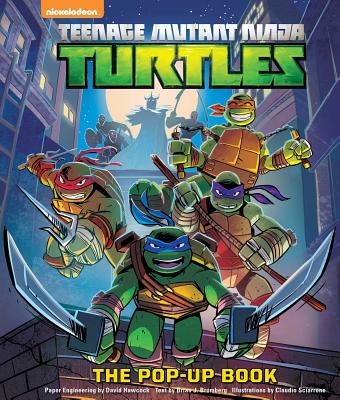 Everyone’s favorite heroes in a half-shell—Donatello, Leonardo, Michelangelo, and Raphael—spring to life in this one-of-a-kind pop-up book!

Straight from the sewers, it’s Leonardo, Donatello, Raphael, and Michelangelo as you’ve never seen them before! Join the lean, green, shell-kicking brothers of the Teenage Mutant Ninja Turtles on a high-octane tour of their world as they fight to keep New York City safe.

David Hawcock has designed and engineered many successful pop-up titles, including Journal of Inventions: Leonardo Da Vinci and The Amazing Pull-Out Pop-Up Body in a Book. After graduating with a degree in graphic design, David worked for design groups in London before turning freelance and specializing in 3-D graphics. He worked with advertising agencies and publishers, including Saatchi and Saatchi and Dorling Kindersley, and he later set up his own company creating ideas-based projects for publishers around the world. David lives in Bath, UK, is married, and has three children.