The Skunk: A Picture Book (Hardcover) 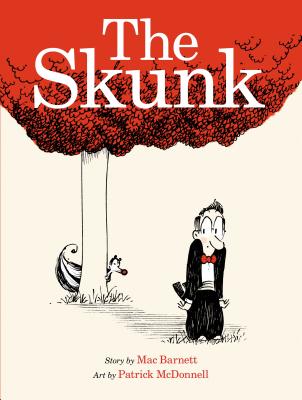 When a skunk first appears in the tuxedoed man's doorway, it's a strange but possibly harmless occurrence. But then the man finds the skunk following him, and the unlikely pair embark on an increasingly frantic chase through the city, from the streets to the opera house to the fairground. What does the skunk want? It's not clear—but soon the man has bought a new house in a new neighborhood to escape the little creature's attention, only to find himself missing something...

This sly, hilarious tale brings together luminaries Mac Barnett and Patrick McDonnell for the first time.

Mac Barnett is a New York Times bestselling author of books for children, including Extra Yarn, which won a 2013 Caldecott Honor and the 2012 Boston Globe-Horn Book Award for Excellence in Picture Books. He also writes the Brixton Brothers series of mystery novels. He was born in 1982 to non-farmers in a California farming community. Now he lives in Berkeley.

Patrick McDonnell has over twenty books in print, including four New York Times bestsellers and the Caldecott Honor winning Me...Jane. His comic strip, Mutts, appears in over 700 newspapers around the world and on the web.

“Gives off a deliciously Hitchockian air of high style and deep-seated dread. . . a story that speaks to the urbane existentialist/absurdist lurking in the heart of every reader.” —Publishers Weekly, starred review

“Clever visual motifs, sly storytelling, and tight pacing make this a picture book that will be enjoyed by both children and their grown-ups. ” —School Library Journal, starred review

“Adults will turn themselves inside out trying to figure it out; kids will either find the whole idea hysterical or just plain befuddling. Peculiar, perplexing, and persistent-training wheels for Samuel Beckett.” —Kirkus

“Told with the seriousness of a thriller. . . Caldecott honorees Barnett and McDonnell combine their considerable talents in this dark comedy.” —Booklist