A Valiant Quest for the Misfit Menagerie (Hardcover) 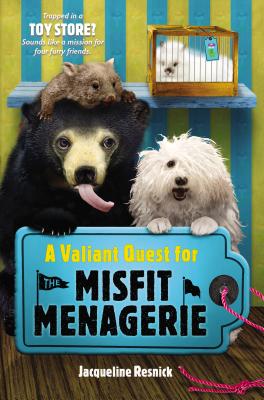 By Jacqueline Resnick
$16.99
Email or call for price.

Trapped in a toy store?
Sounds like a mission for four furry friends.
Bertie, Susan, and the Misfit Menagerie Smalls the sun bear, Rigby the Komondor dog, and Wombat the wombat have at long last escaped from evil Grand Master Claude's Most Magnificent Circus and are finally free to live life at their leisure. But there's something missing. Something that's keeping them from moving on. Or rather, someone. Tilda the Angora rabbit and fourth member of the Misfit Menagerie is being held captive at Toddle's Toy Emporium, a massive toy store more impressive than even F.A.O. Schwarz.
Now Bertie, Smalls, and the gang including a sword-wielding hedgehog must embarkon a quest to rescue their kidnapped friend, braving the mean streets of Hollyhoo City and the bratty Chrysantheum Toddle. It's a journey that will take them over an actual clay rainbow, force them to hide among stuffed animals in a life-like jungle, and lead them to soar above the ground in a hot-air balloon all big tasks for animals who only recently saw that there was a world outside of Mr. Mumford's farm. But if they re valiant enough, they just might reunite the menagerie and find themselves a new home.

Jacqueline Resnick (www.jacquelinewrites.com) received her MFA from the New School in 2009. She grew up in Wynnewood, Pennsylvania, and now lives in Brooklyn, New York, with her husband and dog. The Misfit Menagerie series is her first for children.

Praise for The Daring Escape of the Misfit Menagerie:

"I forgot about the real world when I got caught up in the charming world of the Most Magnificent Circus.” —Dan Gutman, New York Times bestselling author of The Genius Files

“A wild and wonderful circus ride. . . . I took to The Daring Escape of the Misfit Menagerie like a bear to honey. Young readers will eat it up!” —Tor Seidler, author of The Wainscott Weasel, an ALA Notable Book; Mean Margaret, a finalist for the National Book Award; and more

“With a cruel guardian worthy of Rowling, Snicket, or Dahl, and animal friends as endearing as E.B. White’s, Resnick’s debut melted my heart.” —Suzanne LaFleur, author of Eight Keys and Love, Aubrey

"Appeal[s] to readers who enjoy their protagonists on the furry side." --School Library Journal

"The distinctive and engaging animal characters will draw readers in and have them rooting for a succesful escape from the awful circus." --Booklist