Marcel the Shell with Shoes On: Things About Me (Hardcover) 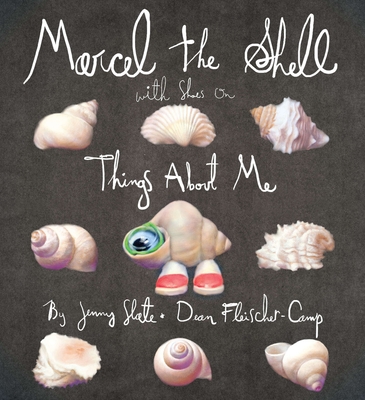 Join little Marcel the Shell with shoes and a big heart on his first picture book adventure! From the brilliant minds of comedian and actress Jenny Slate and writer and director Dean Fleischer-Camp comes the utterly charming, impossibly small, lovable mollusk marvel.

Beloved online sensation, classic picture book character and now the star of a major motion picture, Marcel is an adorable one-inch-tall shell who ekes out a colorful existence. He wears a lentil as a hat and hang-glides on a Dorito, and though he may be small, he knows he has a lot of good qualities like his pretty awesome imagination.

Marcel’s millions of fans and young readers can learn more about this adorable creature and his wonderfully peculiar world in his literary debut.

“Marcel the Shell is a mollusk on the rise.” — People
“We basically can’t get enough Marcel–ever.” — Glamour
“Our favorite anthropomorphic shell.” — Entertainment Weekly
“Delightful.” — TIME

Jenny Slate is an actress, stand-up comedian, and the New York Times bestselling author of Little Weirds. She has been in many movies and TV shows and also plays many cartoon animals. Jenny is a graduate of Columbia University and has a young heart and an antique soul. She lives in Massachusetts and California, with her husband Ben, her daughter Ida, and their dog Sally.

Dean Fleischer Camp is a writer, director, editor and New York Times-bestselling author. Since directing internet sensation MARCEL THE SHELL WITH SHOES ON in 2010, Camp’s work in film and television has been profiled in virtually every major American media outlet. His first feature film, the experimental documentary FRAUD (2018), was released to widespread controversy and acclaim after fighting broke out among attendees at its HotDocs world premiere. Described as a “brilliantly provocative”(Filmmaker) and “exhilarating”(Sight+Sound) “masterwork”(IDA’s Documentary Magazine) that “pushes the boundaries of documentary”(Variety), the film has since developed a cult following and is routinely used in educational settings to promote media literacy. His first narrative feature film, 2022’s MARCEL THE SHELL WITH SHOES ON, starring Jenny Slate, Isabella Rossellini, and Lesley Stahl, will mark distributor A24’s first animated film and its first family film. As a commercial director, Camp has created content for HBO, TBS, Comedy Central, Kellogg’s, P&G, and others. He lives in Los Angeles with his dog, a terrier named Arthur.